Ok, heading south along the coast from Southport, we come to Bootle, at the northern end of Liverpool.

In 2006, RIBA organised a bridge design competition for a replacement of a rather grim pedestrian bridge spanning the Leeds to Liverpool Canal in Bootle. They received 88 entries (some of which I've shown here before), and in early 2007 announced the winning design, from Softroom and Eckersley O'Callaghan. 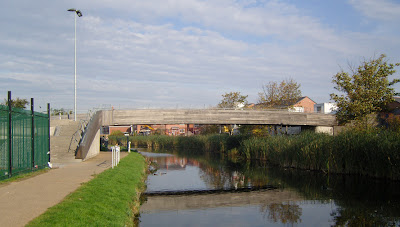 Out of seven RIBA bridge design competitions that I considered in July 2009, this is the only one which has resulted in a bridge actually being built. Such a rare specimen clearly merits close attention. Several of the RIBA bridges foundered over funding, either because there never was any, or because of unacceptable cost increases. The Pennington Road bridge suffered from the same issue, costing £750k to build against an original budget of £400k. That's a very large sum for what is basically a very short span pedestrian bridge, so someone must have thought it was worth it. 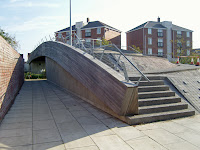 The bridge spans east-west across the canal. At its east end, it ramps straight down to ground level. On the west side, the deck spills you out onto the top of a large mound, which can be descended to the west and south by staircases. Between the staircases, there are a series of switch-back ramps, some of which you can see on the right of the photo (click on any image for a larger version). This is a fairly horrid solution to providing mobility-impaired access, and it's far from clear that there wasn't enough space for a more direct ramp arrangement.

When it was built, the ramps had slopes with planting on them, currently being rebuilt in block-paving, presumably a response to vandalism, although not one that improves the bridge's aesthetic. 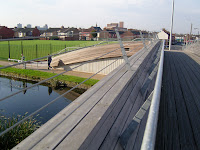 The staircases are bordered by timber walls, which give the impression of flowing seamlessly into the timber beams which carry the main bridge deck. The trough-type deck is bounded by two glulam timber beams, but the timber continuing down the ramps and stairs is essentially cosmetic.

These timber parapets support a handrail and also a post-and-wire fence. I'm not sure whether this is to provide a required balustrade height, or just to stop people skateboarding along the top of the parapet beams. I do like the jagged relationship between the handrail and parapet on the staircases. 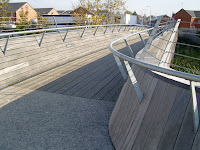 The floor of the bridge is in timber as well, and I have to say it's great to see timber being used on such an "architectural" bridge. I can imagine there were a few questions asked about durability, resistance to vandalism, and fire risk, but the wood has worn well so far, with very little visible damage (although a number of recessed light fittings have been broken, unsurprisingly). 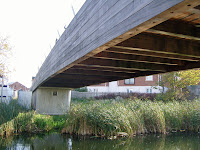 From underneath, the structural form is perhaps clearer. It's also possible to get an idea of the original, unweathered colour of the wood, which is much warmer in tone. I think this is one aspect of the bridge which is a little unfortunate: wood is often commended for its organic approachability, but as it silvers with age it does lose a lot of what initially makes it attractive. A darker timber may have worked better, as from above, the bridge does now look cold and washed-out.
You can't really tell from the soffit photo, but if you squint at the first photo you can just about see that the main span is simply supported at either end on very small lugs, which project out from the concrete abutments (this is made clearer on some of the images at the Eckersley O'Callaghan website linked below). Initially, this offended my structural engineer's sensibility, that the structural form and the geometric form should be closely partnered - the deck supports break up the sense of visual flow. However, it's a reasonable compromise in achieving the architect's concept, so nothing to worry about.
I was left with a sense of appreciation for the bridge's modesty. It has been built in a slightly run-down area where functionality and robustness are laudable aims, and it rightly avoids a level of flash that would never have suited the site.
Further information:

This is an interesting bridge as it appears to be built in a tropical hardwood such as ekki. However, you can run into big problems if you glue such timbers together (glulam) due to the natural oils in them. Any ideas of the type of timber?
Also, the bearing detail is interesting. This must put very high concentrated loads onto the timber. Another reason to believe its a dense hardwood.
Have they clad some of the main structural elements? Looks a bit like it from the architects website.

Also no handrails on the ramps!