The Curious Case of the Invisible Back-stays 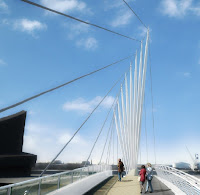 A planning application has been submitted for a new swing footbridge over the Manchester Ship Canal (shown left). It connects the Imperial War Museum North on the south bank of the canal to the Media City development on the north side, which is to become home to several departments of the BBC in a few years time. The Canal is navigable, and therefore the bridge has to be moveable, in line with the Lowry Footbridge and Centenary Bridge nearby, both of which are lifting bridges.
The planning drawings are available online from Trafford Council's planning website (search for application H/70299), and make interesting reading, as they include a fairly thorough explanation of why this particular design was developed by Gifford and Wilkinson Eyre. The bridge is an asymmetric harp-style cable-stay bridge, swinging on a pivot located below the mast. The back-span is weighted to counter-balance the fore-span.
The bridge's details (e.g. the parapets and decking) borrow heavily from Wilkinson Eyre's previous work elsewhere, such as the Gateshead Millennium Bridge and Swansea Sail Bridge. However, the bridge's unusual feature is without doubt its striking central mast, which comprises eight circular poles fanning out from a concrete base. The geometry of these has been generated from two constraints: the harp layout of the cables (which means each pole must be taller than its neighbour), and a desire for the deck cable anchorages to be tangential to the deck's curve in plan (which means the points of support must be spread out horizontally at height). Personally, I think the mast looks unecessarily fiddly, and wonder to what extent it may come to be compared to a giant skeletal hand (particularly when painted grey-white, as intended).

The other new bridge design I've noticed this week is in marked contrast to the Manchester footbridge. The Narrow Water Bridge (shown left) is to be a new highway bridge linking Ireland to Northern Ireland across Carlingford Lough. 280m long, it comprises a large cable-stayed span, with a shorter rolling bascule span opening to permit river navigation.
The image released to the press shows a design drawing heavily on Santiago Calatrava's Alamillo Bridge, although with paired masts instead of one. Like Alamillo, the masts are inclined away from the deck, so that the weight of the mast to some extent counterbalances the tension in the cables. Like Alamillo, there are no back-stays, the far more obvious and economic way of balancing out these tension forces. Because the live load on the highway is variable, the balance can never be perfect, with the result that the mast must resist enormous bending forces and is therefore both massive and expensive. Its other major disadvantage is that it needs substantial temporary propping during construction (or to be built incrementally simultaneously with the deck, as Alamillo was), which again adds considerably to the cost compared to the more conventional vertical mast.
This case of the invisible (or just plain missing) back-stays is curious because it indicates a trend which is difficult to explain. While Calatrava has had several cable-stay bridges without back-stays built (Alamillo, Sundial Bridge, Puente de la Mujer, Chords Bridge), there are very few other examples (Puente Atirantado, Mariansky Bridge, the unbuilt River Wear Bridge). This is largely because however sculpturally striking the concept may be, few schemes come without the need to match expenditure to value. As the Narrow Water scheme is still at an early stage, it's entirely possible that an entirely different design may eventually be built, but the River Wear case shows how readily public enthusiasm for an "iconic", aspirational statement can build. It's great that the Irish authorities have ambitions beyond the humdrum, but it will be interesting to see whether they can raise the budget that would be required for their current design.
Posted by The Happy Pontist at 1:00 PM