I visited this bridge back in July 2008.

It opened in June 2003, and was designed by Flint and Neill with Wilkinson Eyre. The main contractor was Balfour Beatty, with the bridge structure fabricated by Rowecord. It was funded by the Welsh Development Agency as part of a docklands-type regeneration scheme in the vicinity of Swansea's marina area, connecting the city centre to a development area to the east. It cost approximately £3m to build. 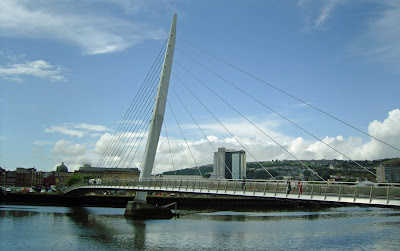 The bridge spans 140m across the River Tawe, supported from a single central mast. The deck is boomerang shaped in plan, and supported on its inner edge by cable stays in a semi-fan arrangement.

Torsion in the deck is accomodated by an 800mm deep steel box girder spine along the inner edge, which in turn supports aluminium deck planks from steel outriggers (see cross-section). The deck varies in width from 4.5m to 5.5m. The parapets are stainless steel. 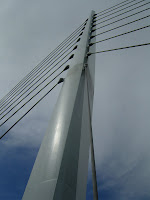 The mast is a 44m tall variable section steel box, inclined at 10° to the vertical to optimise the balance of deck loads and self weight and hence minimise bending moments. Its shape is complex - the face nearest the deck is cut from a curved steel plate, while all other faces are flat. It varies in section from triangular at the very top, through a set of near-triangular and near-diamond shaped irregular pentagons, to an 8-sided shape towards the base. I can't quite decide whether it looks too fussy, or just right. 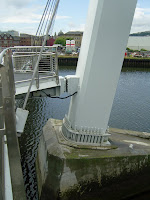 There is a considerable torsion in the deck, resisted at the abutments by pairs of bearings, one below the deck, and one above, acting like a gigantic clamp to prevent twisting. It is resisted at the central mast by a horizontal thrust bearing, which creates a reaction forming a couple with the cable supports.

In any bridge supported only on one side, torsion is a key issue, and there are a number of ways of dealing with it. If the girder has a larger curvature in plan, then the bridge deck can become stable by virtue of the multiple points of support - only three are required for global stability. In such a case, torsion in each part of the deck can be resisted by bending moments in other sections, although a stiff torsion beam is still required to prevent excessive deformation. 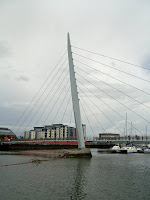 The position of the cable supports relative to the shear centre of the deck can also be used to reduce torsion. On the Sail Bridge, the deck curvature is limited, and the line of the cables actually passes to the "wrong side" of the shear centre, increasing rather than relieving the twisting effect. Awkward torsion restraints at the abutments are therefore probably unavoidable, and although they look odd on drawings of the bridge, they are essentially invisible to the end user. 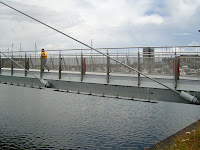 As designed, the bridge has a lateral natural frequency close to that vulnerable to the "wobbly bridge" effect, and so there are tuned mass dampers hidden below the decking. Wind tunnel tests also showed the bridge to be vulnerable to aerodynamic excitation from vortex shedding, which has been addressed by the inclusion of fairings to the deck section, visible in the photograph. 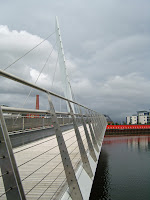 The bridge was erected in segments on a scaffold. Erection by cantilevering from the support is normally an advantage of the cable-stayed form, avoiding the expense of temporary supports. However, in this case, it was thought that the deflections at each cantilever stage would be hard to predict, given the twists involved, and hence erection on falsework was preferred.

The bridge is well-detailed, with the two different forms of parapet on the inner and outer edges complementing each other well. It suits its visual context well, being prominent but dignified, and not out of scale with the urban landscape. Its resemblance to a sail is serendipitous rather than forced.