Righty-ho, from Liverpool, this tour heads inland, following the course of the River Mersey, although with a sharp detour coming up soon.

In Liverpool, there are no bridges across the river, only tunnels below it. Heading east, the next opportunity to cross comes between Runcorn and Widnes. The River was first spanned here in 1868 by William Baker's Runcorn Railway Bridge, with three 93m spans, bridged by wrought iron lattice girders. It's visible in several of the photographs.

The second bridge here was the Widnes-Runcorn Transporter Bridge, opened in 1905. This was the first (and longest) of the only four transporter bridges to be built in Britain. In July 1961, the bridge now known as the Silver Jubilee Bridge was completed (originally the Runcorn-Widnes Bridge), with the transporter bridge being demolished immediately thereafter.

This was designed by Mott Hay and Anderson, at almost exactly the same time as they designed Tamar Bridge. As I noted a month ago, the two bridges make for an interesting comparison. The Runcorn-Widnes Bridge spans 330m, while the Tamar Bridge spans 335m. Both structures are in close proximity to a historic railway viaduct, but very different solutions were chosen. 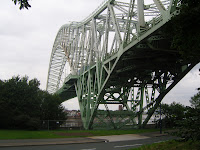 Three-span and five-span truss designs were considered for the Runcorn-Widnes crossing, but rejected in favour of a suspension bridge design. However, wind tunnel tests showed that eddies in the wind caused by the proximity of the Runcorn Railway Bridge could destabilise the suspension bridge, and it had to be redesigned with an unusually stiff deck to prevent this. Nonetheless, the client eventually preferred a steel arch bridge option. At Tamar, the opposite conclusion was drawn when it was shown that the height of the road bridge deck relative to the railway bridge sufficiently reduced the effect of wind eddies.


The arch design was not without its problems. A two-pinned arch similar to the Sydney Harbour Bridge was shown to have a natural frequency of vibration not dissimilar to the rejected suspension bridge option. Making the bridge continuous with its side-spans altered the frequency sufficiently to resolve this concern, and offered the added benefit that the arch could easily be built by cantilevering from either side. Two very similar bridges built in the 1960s were the Bridge of the Americas (344m span, 1962) and Laviolette Bridge (335m span, 1967). 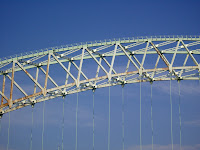 One aspect of the Silver Jubilee Bridge's construction which was perhaps surprising for the period was that it was built from riveted steel, a method essentially then obsolete. It was certainly one of the last, if not the last, large bridge in the UK to be riveted.
Any attempt to judge the aesthetics of a bridge like this might be considered irrelevant. The form and appearance are determined almost entirely by considerations of load-carrying function and of the demands of construction. Nonetheless, the not dissimilar Sydney Harbour Bridge and Tyne Bridge (the latter also designed by Mott Hay and Anderson) have both become city icons in spite of their industrial appearance. The Silver Jubilee Bridge is less iconic but much of that is down to context: power stations and chemical plants define much of the landscape of Runcorn and Widnes, and the Silver Jubilee Bridge seems an inevitable consequence of this rather than something which stands alone.
Its closeness to the railway bridge renders it difficult to see in isolation, as will be apparent from the photos of the main elevation. I find the choice of colour unconvincing as well, it's a little sickly and not really in keeping with a bridge where its sheer scale means it dominates the largely flat landscape. A difficult bridge to love. 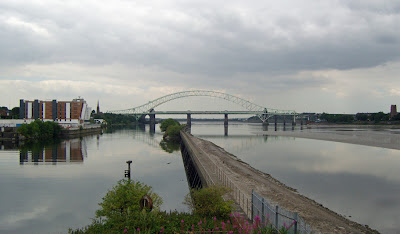 Further information:
Posted by The Happy Pontist at 9:26 PM

Runcorn and Widnes are Cheshire and not Merseyside. Learn your facts.

Hey there dodo! You might want to read the first post in this series before getting quite so over-excited.