The bridges of Eduardo Torroja which I've discussed so far included some innovative (Tempul Aqueduct) and unusual (Quince Ojos) structures, but none to rival the engineer's greatest structural designs aesthetically. But continuing a few years onwards, to the construction of the Alloz Aqueduct in 1939, and that changes (photo courtesy of Bridge Ink).

The Tempul Aqueduct used a concrete box to contain the aqueduct pipeline. At Alloz, water is carried in an open-topped channel, and the structure itself forms the channel. As a result, the avoidance of cracking in the concrete became the dominant design concern, and Torroja used a combination of methods to ensure the concrete remained in compression in all situations.

First, every alternate span is split at midspan (each span being 19m long). This establishes a bending moment diagram such that no part of the viaduct is in sagging, and hence the bottom edge of the channel is always in longitudinal compression (the image on the right and those below are all taken from The Structures of Eduardo Torroja). The joints are sealed using sheets of corrugated lead embedded in the concrete and protected by bituminous mastic.

To ensure that the top edge is similarly compressed, Torroja incorporated prestressing cables into the channel, with a somewhat unusual method for loading the cables. Unlike a modern prestressed concrete bridge, where prestress is applied by jacks at the ends of the cables, Torroja introduced transverse jacks between pairs of cables, and by jacking the cables apart, lengthened and hence stressed the cables. If more prestress is required than can be provided by such a jack, it is simply applied at multiple locations. A similar approach to prestressing has been used by Eladio Dieste in his brick shell structures. 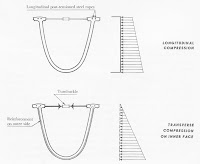 Transverse prestress is also applied, using bars spanning between the channel's top flanges, placed at roughly 5m intervals. By tightening turnbuckles on the bars and drawing the two flanges slightly together, the inner face of the channel becomes compressed.

These techniques all seem highly unorthodox to a modern engineer, given the way that other methods have come to dominate in the intervening decades. But they exhibit a remarkable practically-minded ingenuity, and a concern to dimension and arrange the structure to produce the desired behaviour, rather than simply to design a more-or-less arbitrary structure and make it strong enough to cope with the resulting distribution of forces (as is so often the norm in structural engineering).

However, the real reason that the Alloz Aqueduct has lasted so well is not the technology, but its appearance. It is fundamentally difficult to make a long, deep concrete viaduct look attractive, but Torroja undoubtedly succeeded. The use of the parabolic channel cross-section is important, with the curved underside working well against the structure's overriding linearity. But the compass-shape legs, each of them offering a saddle support to the aqueduct, are the standout feature, carefully proportioned, and strikingly memorable.

This is my favourite Torroja bridge.

Related links:
Posted by The Happy Pontist at 9:37 PM

This is a brilliant case study of the functional requirements (an uncracked concrete channel) influencing the structural form!

For all the practical\aesthetic issues that are simple to rectify in hindsight, it's a clear case of an engineer taking a problem and working through it step-by-step!

I particularly love the turnbuckle tension which 'bends the horseshoe' to keep the intrados in compression. I don't think I've ever seen that before, but the diagram makes the reasons and practicality incredibly clear.

I'm thoroughly enjoying this series of posts - many thanks.