Completed in 1926, when Eduardo Torroja was only 27, the Tempul Aqueduct is a truly remarkable bridge design. Replacing an earlier structure which had been destroyed by flooding in 1917, it was one of the first examples of that very modern structural form, the cable-stayed bridge.

It wasn't quite the first. Albert Gisclard's Cassagne Bridge of 1907, and Gaston Leinekugel-Lecocq's Lézardrieux Bridge of 1925 both predate it, and before that there were a large number of hybrid suspension and cable-stay designs, such as Albert Bridge in London and Brooklyn Bridge in New York. Even further back, there were proposals such as C T Loescher's timber design of 1784. 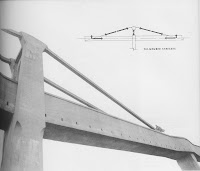 In Torroja's design, the main 60m span over the River Guadalete is supported by single stays from each tower (pictured right), with the central part of the span resting on half-joints. Torroja introduced these hinges (which seem an odd choice for an aqueduct) because he was uncertain about the compatibility of deflections of the various structural elements, especially because of the way in which the stays were stressed. Reflecting on the design in later life, he considered he could have been less conservative and adopted a continuous beam.

The motivation to adopt a stayed bridge was to provide an alternative to a design using three equal spans of 20m, which required the construction of piers within the riverbed. Concerns were raised that even with piled foundations, these piers could be undermined. Torroja proposed to use cable stays to replace the the river supports entirely.

The twisted steel cable stays passed over saddles on top of each tower, which were jacked upwards to tension the cables and also to lift the bridge off its formwork. This worked very effectively in practice, as the river flooded heavily during construction, and the tower-heads were jacked up to release the formwork, which was allowed to wash away without damaging the aqueduct. The cable forces could also be readily adjusted to deal with the effects of concrete shrinkage and cable relaxation.

Once all adjustments were complete, the tower-heads were concreted in place, and the cables surrounded in concrete to provide long-term protection against corrosion. This approach never found great favour in cable-stay bridge design, perhaps because of the weight of concrete required and difficulty ensuring it would be self-supporting without cracking.

The horizontal component of the cable-stay force acts to prestress the deck, which is a reinforced concrete box containing a cast iron pipeline, with a very bulky appearance, especially on the spans away from the river.

In the modern cable-stay bridge, the cables are largely thought of as providing a series of vertical points of support to the deck to reduce its effective span, although it can be thought of as simply a variant on a post-tensioned bridge where the stressing cables are brought above the deck surface, hence providing a much greater angle to resist shear and lever arm to resist bending (this concept being most clear in the extradosed bridge). It's clear that Torroja thought of this bridge in both ways. Writing in connection with reinforced concrete cantilevers, he wrote in the Philosophy of Structures:

"For longer spans, the tension zone can be separated in the form of an independent cable, in a triangular assembly with the beam compressed over the pier."

Judged by modern standards, the bridge isn't visually successful. The deck is heavier than it needs to be, the stays are unattractive, and the series of short approach spans is obtrusive. This is a bridge which marks Torroja's technical achievements, it's not on a par with some of his later designs, which were far more sensitive aesthetically.

In 2008, the go-ahead was given to carry out 405k euros of rehabilitation work on the bridge, now know as the Puente de San Patricio (Bridge of St Patrick), although I don't know whether this has been completed.

All pictures have been taken from either Torroja's Philosophy of Structures or The Structures of Eduardo Torroja, there are very few photographs of the bridge online, and I haven't been able to locate any without copyright restrictions. Click on any image for a larger version.