I've recently been reading Eduardo Torroja's The Philosophy of Structures, and was wondering quite what to make of it here online. Most of the book relates to building structures, and although I have a great interest in structures and architecture beyond matters gephyrological, I would like to keep to my self-imposed restriction that this blog is for Pontism, and nothing else. 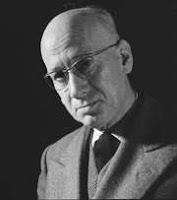 Torroja (1899-1961) was one of the most notable structural engineers of the twentieth century. His built work was less prolific than, say, Félix Candela or Heinz Isler, and certainly less spectacular than the likes of Pier Luigi Nervi or Eladio Dieste. In part, his renown is due to his wide-ranging commitment to structural engineering as a profession: as well as being a designer, he ran various companies and research laboratories, and he was the founding president of the International Association for Shell and Spatial Structures, who still award the Torroja Medal in his honour.

One reason he remains widely recognised was that he was one of very few engineers to articulate his design philosophy in writing. While The Philosophy of Structures is sometimes heavy going, The Structures of Eduardo Torroja is a simple pleasure, mainly comprising photographs and sketches, with the designer's explanations of his work. Both, incidentally, are out-of-print, but relatively easy to locate secondhand.

Torroja has some interesting things to say about design, many of which are relevant to bridges if aimed at other targets. His basic point of view is summarised in the introduction to Philosophy:

"Structural design is concerned with much more than science and techniques: it is also very much concerned with art, common sense, sentiment, aptitude, and enjoyment of the task of creating opportune outlines to which scientific calculations will add finishing touches, substantiating that the structure is sound and strong in accordance with the requirements".

Elsewhere in the same book, Torroja makes clear his view on how engineers should balance art and technology:

"Every art demands a technique ... In our case, the basic technique is essentially static balance and strength, against which so many objections are leveled on the count that technicians lack adequate culture and aesthetic feeling. Conversely, how much nonsense germinates in the mind of the artist who has not the requisite technical training and understanding!"

Over the next few posts, I'll cover several of Torroja's bridge designs, in chronological order. While doing so, it's worth noting that with one exception, they don't really rank amongst his finest designs, such as the Zarzuela Hippodrome (pictured right, courtesy of Paco Garate on flickr), Algeciras Market Hall, and Frontón Recoletos. I'd encourage interested readers to look at those if not familiar with Torroja's work.

I won't cover all his bridges: there were several built in Morocco late in his life for which I haven't been able to locate sufficient information, and there are a couple of unbuilt designs in The Structures which I'll also leave alone for now.

Posted by The Happy Pontist at 8:05 PM

Eduardo Torroja is well-known for the spanish engineers, his work and book it's a reference in concrete structures.

He was also co-founder of CEB and chairman of FIB after Eugene Freyssinnet (both organizations merged in 1998 as fib (CEB-FIB) and have published key documents as MC90. He also followed Robert L'Hermite in his initiative and was the spanish co-founder of RILEM.

On the bridge side, his masterpiece is Martin Gil, a 209 m span concrete arch, built using a self supporting steel frame that was embedded in the final concrete section.

Another remarkable structure was Tempul aqueduct, built in 1927, which incorporates a first rudimentary approach to a cable-stayed structure.

As jaume indicates, his work is extremely influential among spanish engineers.

I'll be covering both the Martin Gil and Tempul bridges (indeed, Tempul will be the first to feature), although neither is actually my favourite Torroja bridge design ...

Neither of those two are my favourites either in terms of design, although both structures are probably the best known from his bridges for obvious reasons.

Interestingly you could stablish somehow a connection between these two bridges and two of the early bridges from freyssinet (tempul vs. boutiron/verdrue => a primitive cable stayed system vs. arch prestressing via midspan jacking) and martin gil vs. plougastel (innovative scaffolding/arch construction).

Both engineers shared an intelectual friendship and rivalry - Torroja defending RC and Freyssinet looking for the solution of prestressing was, in my oppinion, won by the Freyssinet, and the bereakthrough achieved with Luzancy and the Marne bridges was never answered by Torroja. However, his RC shells - particularly recoletos with its 8cm minimum thickness - was a really remarkable structure.

My favourite bridge from Torroja is the tordera bridge: a multispan steel composite deck where the steel part is made of a variable depth truss following the bending moment law - he used an elliptical shape - (the spans 45-54-45 are simply supported with joints at every pier)