What a curious sense of deja vu!

The winner has just been announced for RIBA's River Soar Footbridge contest. The new bridge, a short span over the river in Leicester, is part of a regeneration project and connects the National Space Centre with proposed housing at Wolsey Island.

The winning design is from Buro Happold and Explorations Architecture, the same team who also just won the Metro West River Liffey competition.

With, it might seem on first sight, the exact same bridge! 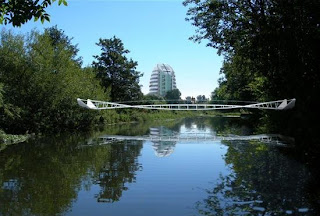 It's a remarkable double achievement for the designers.

The design is a partially underslung suspension bridge, which I'd guess for many people will be reminiscent of the London Millennium Bridge, although it doesn't go for such an expensively shallow cable catenary. There are also similarities to the Arup / Wilkinson Eyre designed "living bridge" in Limerick although that one is completely underslung. The Arup design also has the advantage that it was (so far as I can tell) designed as a self-anchored bridge, removing the expense of anchorage foundations.

Happold's design is also more expensive than a conventional suspension bridge due to the need to brace the main cables apart rather than just hang the deck below them, but it certainly results in a very elegant design.

Unlike the far larger Metro West bridge, it's an appropriate structural design for the context. The support towers will require oversized foundations (unlike a conventional suspension bridge, there are no ground anchorages, with the main cables held by the towers acting as cantilevers), but that won't be apparent visually.

Images of the other shortlisted entries aren't yet available, but I'll return to this one if they are published.
Posted by The Happy Pontist at 11:14 AM

Having been involved in the submission for this project, the proposal is that this will also be a self anchored suspension bridge, with horizontal loads taken in deck compression. The foundations will require tension piles (due to the couple induced by the cantilevers), but we have tried to reduce the foundation loads as much as possible.

Many thanks for your comments however: I agree with your previous sentiment that it is good to have a critical eye cast over all bridge designs.

I spotted the design being described as self-anchored, and was I admit somewhat dubious about it, partly because the deck looks too slender to carry significant compression, but also because the cantilever pylons clearly require a large tension to be anchored to ground (they're really just a much stubbier version of a conventional suspension bridge tower with its back-span cables and ground anchorages).

Most self-anchored suspension bridges historically have a backspan long and heavy enough to eliminate the need for a "hold-down" detail such as tension piles. It's only on a footbridge of this small scale that it becomes feasible to avoid this.

Incidentally, looking back for predecessors to the Leicester design, I found the Lascellas Bridge, which while not self-anchored, does indicate how hard it is to come up with something entirely new!.

The similarity between the Leicester and Dublin desings has also been noted by Building Design, who've obtained comment from Buro Happold and Leicester Regeneration.

How nice to see a good idea being so inventively declined in different contexts.
Of course the real inspiration of Leicester is not Liffey, but RFR's Seine crossing in Paris,(at a much greater scale) if not the Saltash Bridge.

For those not familiar with it, the RFR bridge is the Passerelle Simone-de-Beauvoir. Which has been described as more of a lenticular truss, but there are clear similarities. Of course, the RFR bridge has its own debts e.g. there is a not entirely dissimilar design by Wolfdietrich Ziesel.