In December last year, a winner was announced in a competition to design a new moveable footbridge in Rotterdam. My Dutch is non-existent so in what follows below I apologise for any omissions or errors that may have been introduced courtesy of Google Translate.

In late 2007, the search began for a suitable design for a proposed bridge connecting the area of Katendrecht to Wilhemina Pier. Although it was to be primarily a footbridge, it also has to provide access to emergency vehicles.

In February 2008, five design firms were invited to provide preliminary ideas: Bolles & Wilson, DISSING+WEITLING, Quist Wintermans, Bureau SLA / DHV / Delcan, and ZUS. By October, the list had narrowed to three, and those three designs were made available for public consultation.

SLA appeared particularly aggrieved at being dropped from the final three, issuing an angry press release [PDF] which has been extensively picked up elsewhere on the web:

"Rotterdam thinks the bureau SLA design is very innovative, but also - very difficult. Bureau SLA, with their engineering consultants DHV and Delcan, are asked for extended calculations. The city can hardly believe it: this bridge will not collapse? More calculations and details are asked for. The city’s engineers still cannot believe it. This is too difficult, surely this is madness! The best thing to do and be done with the whole conundrum is to disqualify the entry. And so it happened. The jury, consisting of Holland’s finest designers, are told not to look upon the scary bridge any further and Bureau SLA are expelled from participation in the competition."

It's far from clear which judging criterion SLA actually contravened (if any). Nonetheless, SLA's bridge has an uncommonly ambitious opening mechanism - hydraulic arms are required to pull in the two main bridge spans from a flat position, gradually raising them up into the air like a pair of scissors. The hydraulics not only have to operate from an extremely shallow angle, vastly multiplying the forces involved, but also lift the entire bridge weight without the benefit of any counterweight.

Moveable bridges almost always involve a counterweight so as to reduce loads on the opening mechanism and hence both construction and operational costs. So while the SLA design concept may well be feasible, it's certainly more risky and likely to be far more expensive than the proposals that did get shortlisted. While the design is certainly spectacular, it's worth noting that the competition criteria specifically requested a bridge which was not iconic.

SLA doth protest too much, methinks.

Following selection of Quist Wintermans as the winner, it's expected that construction will commence in late 2009, with the bridge opened in 2011. Their design is a conventional hydraulically operated counterweighted bascule bridge, with the main point of interest being the way the span is offset from the pivot point in a trowel-handle manner. It's a nice design, modest and appealing in its simplicity.

The competition website is http://www.rijnhavenbrug.nl/, which has extensive details of the three shortlisted designs. Below, I've included images of all the entries I can find, i.e. all except for Bolles & Wilson.

Of the two losing designs, DISSING+WEITLING's is even more modest than the winner, with the orange stripe seemingly an effort to offset this. The ZUS design incorporates habitable towers, which contravenes the competition's requirement for a flat, unimposing structure. I find the very traditional overhead-leaf bascule design somewhat unconvincing: there are lots of bridges of that type in Europe and it gives the impression that more thought was given to the buildings than the bridge span itself. 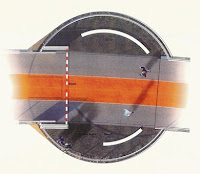 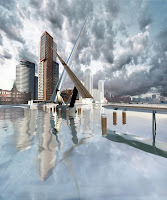 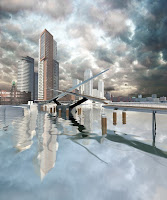 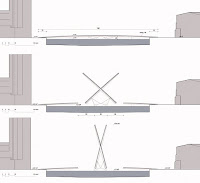 The Bureau SLA scheme might make more sense if the two leafs of the bascule were connected with a sliding connection, balancing the otherwise ambitious lever arms. It would make even more sense if the bases didn't move together as the leafs hinge upwards: more like a traditional bascule bridge and much more like the excellent Wilkinson Eyre / Gifford design for Poole Harbour, with its diagonal cut, with which this and several other recent 'innovative' bridges appear to have extraordinary similarities.