There have been several schemes to build new bridges at Leamouth in east London (where the River Lea joins the River Thames) over the years. One such scheme, held in 2003, and promoted by Leaside Regeneration, involved a design competition for an opening footbridge. This was to provide a link into the somewhat isolated and downtrodden Leamouth peninsula (shown on the right) and encourage new development.

Six entrants were initially shortlisted, and the winner was announced in July 2003 as Whitbybird.

Whitbybird's £3.5m winning design received planning permission in 2005, but funding was withdrawn later the same year, and the bridge was never built.

That design would have been spectacular and unusual if built - but also incredibly inefficient. In the closed position, it greatly resembles Santiago Calatrava's Puente del Alamillo, with a pylon which will carry substantial bending moments. As it opens, its weight is unbalanced at every stage, so the opening machinery has to be oversized, with higher running costs than a balanced design. Like the Gateshead Millennium Bridge, it would have been unique and expensive.

Of the other designs, both those from Price & Myers and Future Systems suffer from inaccessibility: steep approaches unsuitable for mobility-impaired users. They seem to be futuristic visions out of context to the site, creating technological challenges for their own sake rather than as a response to clear functional needs.

The Ian Ritchie design is a retractable bridge, an unusual opening variant often shunned because of the amount of space required on the river bank - although by overlapping that space with a permanent ramp, they have minimised the difficulty. Blue Office's inflatable truss would be the sort of thing to brighten the hearts of knife-wielding East-End vandals bent on puncturing architectural ambition.

The McDowell and Benedetti design is a swing bridge with an unfortunate lump and, I would guess, a problem inherent to the cable-stayed swing bridge whereby massive twists and inertias are generated during operation, as the cables provide no lateral stiffening to the supported deck.

As ever, links are only provided if a firm has project-specific information on their website. Click on the images for larger versions. I have only incomplete information on the competition, so if you are aware of any errors or omissions, send a comment. 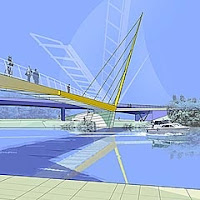 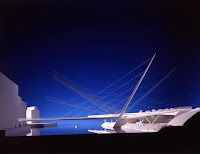 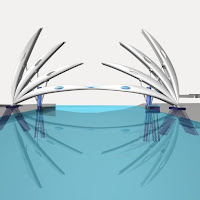 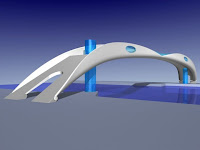 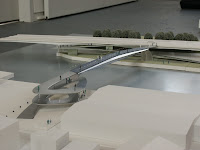 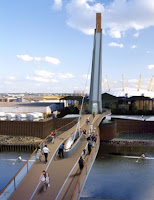 Now, this competition wasn't the only attempt to get a bridge built across the River Lea at Leamouth.
2002 had seen the end of the Peabody Trust's scheme for an inhabited bridge over the Lea, designed by Cartwright Pickard.
In 2004, while the Whitbybird design was being prepared for planning approval, Wilkinson Eyre and WSP were appointed to design a bridge elsewhere on the peninsula, part of a development by Ballymore. Like Whitbybird, this survived only two years, before receiving a bad review by CABE, and being dropped in favour of a design by Thomas Heatherwick.
I can't get my head round what went on with the Heatherwick design - the images available show an outlandish and impractical design with the deck supported on "ribbons" from adjacent buildings. But planning drawings dated March 2007 [PDF] and with WSP and Heatherwick's names on them show a far more conventional cable-stayed bridge with no support from the buildings. It was reported in 2008 that Heatherwick's design had in turn been dropped in favour of a more conventional solution by the wider scheme architect SOM, so perhaps the drawing shows that design. SOM's own images of the scheme on their website continue to show the Heatherwick proposal ... confusing!
In any event, the bridge remains unbuilt and is likely to remain that way while the credit crunch continues.
WSP / Wilkinson Eyre 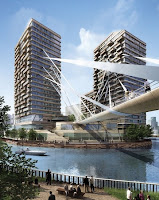 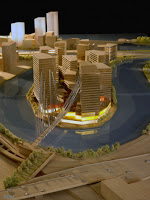 Why Tower Hamlets keeps Leaside Regeneration going is a complete puzzle. If an independent scrutiny was undertaken of what it promised compared to what it achieves was published it would be extremely illuminating. Seven Years ago Poplar Riverside was going to be regenerated within 7 years - not a brick laid, filling in of underpasses under A12 and zebra crossings installed scheduled for 4 years ago - still on their webs ite - nothing yet. Thisbridge, my the fanfare when the competiotion ws won - great at publicising the proposals - terrible on delivery. Still keeps tem in jobs, I suppose...

And it doesn't stop there: there are currently proposals for 9 new bridges over the Lea in the area, mostly between the A13 bridge and the Twelvetrees Crescent Bridge further upstream. These are all currently barely lines on a page, but I wouldn't be surprised if there were a few more competitions in the area.

Looking at the proposals for the Heatherwick crossing, it seems the Crunch has taken its toll on the development it was meant to be servicing. Having see the site this morning, all of the foundations of the illustrated development are in place, but there is no site presence and no work is going on! I wonder whether it will get picked up in the furture...

The Heatherwick scheme is rumoured to have been killed when, very late in the day, the developer noted that the build quality required in the two huge tower blocks to satisfy the DMRB 120-year life might be everso slightly more expensive than their normal build quality!

For those not au fait with UK design requirements, that means that while bridges are designed for a 120-yr life span, buildings are not: hence the buildings would require substantial additional cost to make them suitable to support Heatherwick's ribbon-cradled bridge. I think that's slightly unfair: the design lives given in the codes are notoriously meaningless (although this will change with the Eurocodes), and if it were an issue, the obvious option would simply be to reduce the bridge's design life, not the reverse.