Updated 8/Feb/09: New Edward Cullinan images added (all copyright Edward Cullinan Architects)
The Peabody Trust is a London-based social housing charity, founded in the 19th century by philanthropist George Peabody. As part of their efforts to provide affordable housing in the city, they've been involved in at least two bridge design proposals over the years. 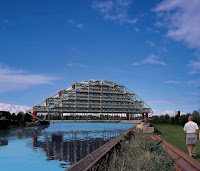 They promoted a design by Cartwright Pickard for a landmark inhabited bridge at Leamouth in east London (pictured left, this is one of many bridge schemes at Leamouth to fall by the wayside over the years, in this case being dropped in 2002).

They also ran a competition for an inhabited bridge across the Thames between St Pauls Cathedral and Bankside in 1995 (later to become the site of the infamous Millennium Bridge), and that's the subject of this post.

The Peabody Trust sought to promote "the bridge as urban hamlet", asking the competitors for "a subtle interweaving of concepts relating to structure, urban design, relationships between cost and value, and the quality of life that should be possible in the heart of London".

It's hard to tell how serious anyone really was about the scheme, although inhabited bridges were certainly in the air at the time, with a separate competition elsewhere on the Thames organised by the Royal Academy the following year, and exhibitions at both the Royal Academy and the Centre Pompidou.

Six firms were invited to submit entries, and so far as I can tell, no winner was declared. All the entries are documented in the Living Bridges book, published by the Royal Academy on the occasion of their own competition and accompanying exhibition. Where I haven't been able to find images of the bridges elsewhere, I've taken them from the book (with the Peabody Trust's permission, for the images they hold copyright on).

I've credited the firms mentioned in Living Bridges, although I imagine others were involved, especially on the engineering side. However, unlike many more recent bridge design competitions, the architects involved for the Peabody contest were generally notable more for their building work than for their bridges.

To a great extent, it looks like some entrants saw the bridge was seen as incidental, as a necessary evil in creating a site for waterside (or over-water) housing.

Comparisons with the great inhabited bridges (Old London Bridge, pictured, and Ponte Vecchio) may be instructive, particularly for the entries here which shirked the challenge of actually siting the housing on the bridge itself. While that's sensible from a practical viewpoint (e.g. provision of sewerage and access for emergency services) it falls short of the romantic idea of a habitable bridge.

Levitt Bernstein, Hunt Thompson, Allies and Morrison and Edward Cullinan all offered elegant modern bridges, but merely as an afterthought to riverside or river pier apartment blocks. This is the docklands model - urbane, genteel, but hard to get very excited about. There's hardly any shortage of riverside apartments in London, after all, and these designs omit the key element which made London Bridge and the Ponte Vecchio unique communities - the focus on a street.

John Outram bucked the trend with an admirably idiosyncratic anti-modernist whimsy which did at least echo the classical living bridge ideal, but which could never have been built in 90s London, however much the neo-classicists fought against the prevailing mood.

Richard Horden's design also succeeded in keeping the housing on the bridge, albeit in an elongated greenhouse fitted out with renewable energy systems. This was probably my favourite - it has less visual impact than Outram's proposal, but I think more openness to the elements would be essential in a prominent location like this. 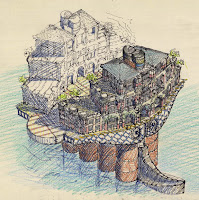 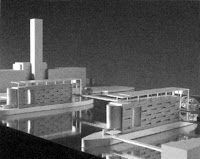 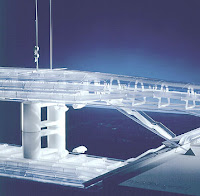 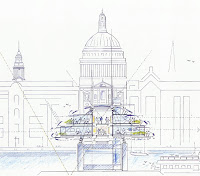 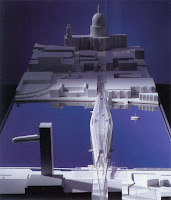