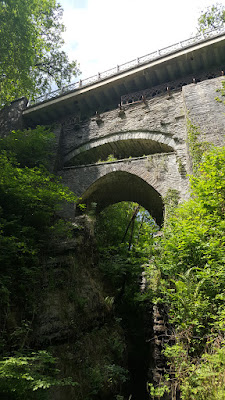 So, Devil's Bridge, we meet again.

Well this is a different Devil's Bridge to last time. Two down, many more still to go!

Devil's Bridge (or in the local tongue, Pontarfynach) is one of the better known tourist attractions in the Aberystwyth area. Anyone can cross the bridge, as it carries a public road, but to see it properly requires payment to access private land. In addition to the bridge, this gives access to a very scenic woodland walk, and is well worth the price of admission.

The legend that gives this bridge its name is the same or similar to most other Devil's Bridge tales: an old woman's cow somehow crossed over the river Mynach, and she couldn't get it back. The Devil offered to build a bridge in return for the first living soul to pass across it, and the old woman agreed. She threw some bread across the bridge, and her dog ran after it. The Devil, having expected a higher price, had to be satisfied with the dog.

What I learn from this legend is that the old woman was pretty smart to give up the dog in return for getting her cow back. It must have been a very impressive cow to have jumped across the River Mynach gorge before the first bridge was built.

There are three bridges here, each one built above its predecessors. It goes one better than Rumbling Bridge, in Scotland, in that respect.

The lowest span is medieval, generally thought to date back at least to 1188, and comprises a pointed masonry arch sitting astride a remarkably deep cleft in the local rock, which contains the River Mynach (Afon Mynach). The most widely-held view seems to be that it was built by the monks of Strata Florida Abbey.

In Gwyndaf Breese's book on Welsh bridges, he suggests that the bridge reported by a traveller in 1188 was a "rickety wooden bridge", and that the stone span may have been built a century later.

Other than for its age and situation, it is relatively unremarkable. The arch barrel consists of thin bands of stone, springing directly from the rock. The profile of the barrel is noticeably distorted and unsymmetrical.

Breese quotes Jervoise in suggesting that the lowest bridge was widened or rebuilt at some stage. Jervoise's comment was that pointed arches were not in use in the 12th century, and the span must therefore have been a later reconstruction. I'm no expert but I don't think that is conclusive: the pointed spans in the medieval Exe Bridge are believed to be original, so why not here?

In 1753, a second bridge was constructed, a segmental stone arch spanning 32 feet. This bridge was later modified, with the height of its spandrel walls increased in 1814 to reduce the steepness of the highway approaches. It looks like you can see evidence of this in the banding of the horizontal stones in the spandrel walls. The ornate cast iron parapets were added at this time.

Buttresses at either ends of this span appear to have been added later. At one end of the bridge, the arch appears to spring from a higher point than at the other. Instead, it seems that the original springing is hidden within the masonry buttress, which continues under the arch barrel.

The third bridge was built in 1901 to a design by the County Surveyor Roderick Lloyd. Masonry abutments were built up to support steel lattice girders spanning 60 feet and carrying a 20-foot wide roadway.

This was substantially modified in 1971, when the castellated plate girders visible today were inserted along with a concrete deck slab. It looks to me that the parapets were designed to retain the appearance of the lattice girders, but clearly what's there now could not have been the original spanning trusses as there are no upper or lower chord members.

The newer girders are supported at one end on the abutment of the middle bridge, and at the other end on steel portal frames carrying the load to either side of that span. This was obviously an unfortunate period in the life of Devil's Bridge: the position, appearance and level of the new girders were all entirely unsympathetic to this span's predecessors. 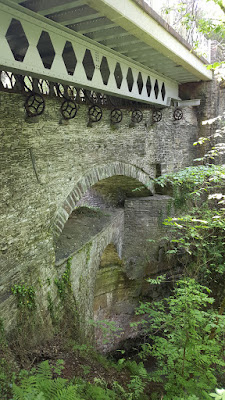 Posted by The Happy Pontist at 8:52 PM

Only the other day did I figure out your blogger persona is based on the French word for "bridge." Looking at the photos of the Welsh Devil's Bridge I have to agree that "the position, appearance and level of the new girders were all entirely unsympathetic to this span's predecessors." It certainly is incongruent, but what were the designers to do? Presumably the girders were added over the top to make the bridge stronger and enable it to carry heavier loads. The ever expanding human population results in many structures that have odd and incongruent additions, and which have the effect of detracting from the original architecture. In this particular case I don't find the girders to be entirely offensive. I like the diamond pattern and the ornamental and perhaps functional perpendicular circular iron connecting the old stone bridge to the new steel. Engineering decisions are based on the materials and technology of the times. In the olden days people were forced to use the materials common to the area. I supposed many of the stones in the original structure were picked out of the agricultural fields or were perhaps found in a nearby talus slope or rock quarry. It obvious that the cheapest most suitable materials that can be easily found nearby will be the material of choice. As for the new girders it's highly possible that they could have been delivered from somewhere in Asia due to the cost. If the decision was based on the idea of creating necessary improvements to an ancient structure, then the mixed race marriage is not totally without sound reasons. The added top girders seem to keep the loads off the old bridge. The girders were probably the easiest and most economical decision. Additionally they certainly offered certain elements of ABC bridge construction. Based on my very limited knowledge of the project and its needs, it seems to be working; it was most likely economical, and it's not totally unaesthetic. If one can easily understand the purpose of certain engineering decisions, the incongruities become more palatable. Therefore, I give this bridge upgrade a pass. That said and alternative could have been to build a reinforced concrete arched girders over the top, and then have faced them with original stone of the same type. Perhaps a talented designer could have made the addition almost imperceptible. It matters little to me, I don't live nearby, and don't know how many people actually look at the underside of this particular bridge anyway. Would all the extra artistic aesthetics been actually worth the extra effort and cost? Apparently the local government didn't think so.

Only a devil can make such a mess :)

The Happy Pontilist:
Dear Happy,
Hope all is well with you, since you haven’t posted for several months. I’ve looked forward to your posts, eagerly. Hope Brexit isn’t the reason.
Fred Maurer

Just far too busy with work and other tasks right now!