I don't normally make a point of mentioning technical papers on this blog, but maybe it's something I should do from time to time. I have previously wondered about putting together a semi-regular roundup of papers that might be relevant or interesting to my readers. However, I don't want to make more work for myself, so this may only very rarely happen!

This gives an overview of timber bridges in China of a type that dates back over 1000 years. I first properly encountered them in Ronald Knapp and Chester Ong's excellent book Chinese Bridges, which presents several bridges from the Zheijang and Fujian regions. The design and construction of these bridges is considered important enough for them to be included on UNESCO's Intangible Cultural Heritage List since 2009. A historic example, the Rainbow Bridge, is illustrated on the Song Dynasty painting Along the River During the Qingming Festival (~1085-1145), pictured above. 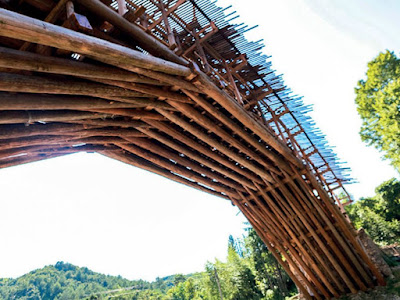 Nearly 100 of these woven timber arch bridges survive. Several have fallen victim to disaster through fire or flooding, including at least one of the bridges featured in Knapp's book. However, the construction skills have undergone a revival, such that some of these bridges have since been rebuilt. Indeed, the paper lists some 19 woven arch bridges which have been rebuilt or newly built since 1999. 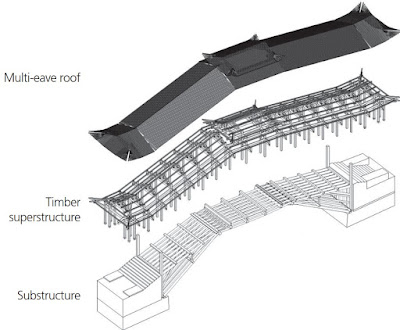 The essence of these bridges is the structural form of a woven polygonal arch, which is described in detail in the paper, including several construction photographs. It consists of two sets of arch members which alternate across the width of the bridge, so that there are two superimposed polygons. These are locked together by transverse timbers, creating a triangulated system which in one way behaves not like an arch, but like a beam. However, it must also behave as an arch, as the main timbers are carefully butted together to be able to transmit axial load.

The paper in the ICE Proceedings is a short (6 pages) but very clear and useful introduction to these amazing bridges, and definitely worth a read if you have access to it. In case anyone would like to learn more about the woven arch bridges, I've collected a set of links to more detailed technical papers at the bottom of this page.

It wasn't until several centuries later that a similar bridge design was developed in Europe by Leonardo da Vinci. His design is discussed in a 2004 paper by Ceraldi and Ermolli, which compares da Vinci's design to the earlier Chinese bridges. Da Vinci's solution does not use the butted timbers, and is an open frame rather than having many alternating arches all immediately adjacent to each other.

You may be interested in my latest book, which should be out in late Fall 2018.

It is titled CHINA'S COVERED BRIDGES: ARCHITECTURE OVER WATER. It ranges far beyond Fujian and Zhejiang to introduce some spectacular covered bridges never written about in English.

This is a companion volume to the 2014 book co-authored with Terry Miller AMERICA'S COVERED BRIDGES: Practical Crossings, Nostalgic Icons.

I enjoy your blog

That sounds very interesting! I often review books that I purchase, but a good way to guarantee a review is to send a promotional copy - contact the email address on my profile if interested.

Good idea. When the book is available, I'll put you down for a promotional copy. Please send me your mailing address to rknapp2@hvc.rr.com