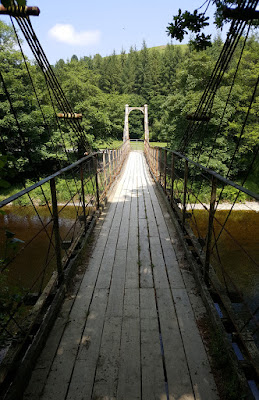 This is a very unusual pedestrian bridge hidden on a private estate, and I think it is not very well known. I discovered it thanks to one of the Civil Engineering Heritage books. Please be aware that it is on private land, not a public right of way, so there is no right of access to the bridge without the permission of the landowner. 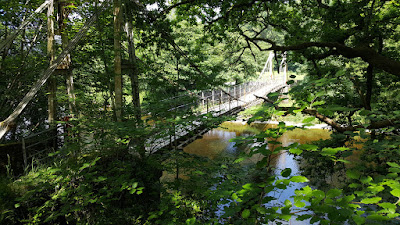 The Doldowlod Estate was purchased and developed by the famous engineer James Watt near the beginning of the 19th century, and it remains owned by his descendants, the Gibson-Watt family. Doldowlod Hall was developed by Watt's family in the mid 19th-century, but it's not entirely clear when this bridge was built on the estate, carrying a path across the River Wye. 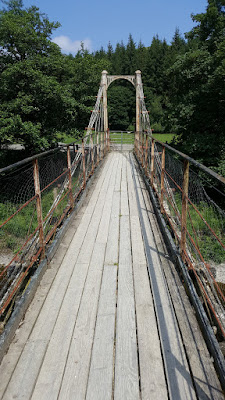 McQuillan includes this bridge in his paper on brewer-turned-bridge-engineer James Dredge, but refers to it as Llanwrthyl Bridge, or Ystrad Bridge, stating that it was built around 1867 by Dredge's son William. Doldowlod is around 3.5km from Llanwrthyl, and Ystrad is the name of a farmhouse on the west bank of the river close to the bridge. 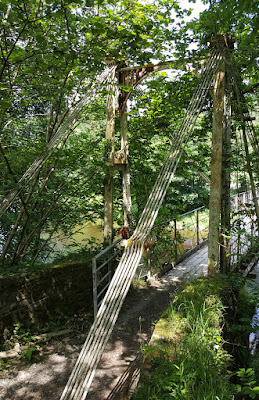 In Civil Engineering Heritage, Roger Cragg is silent on the designer but indicates the bridge was built around 1880, with the ironwork cast at Llanidloes Railway Foundry. Alan Crow, in the excellent book Bridges on the River Wye, says the same. This date seems to have been estimated by the bridge owner when the structure was visited and added to the ICE Panel for Historical Engineering Works database. 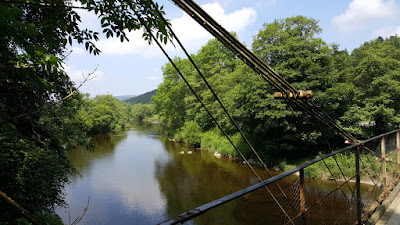 James Dredge died in 1863, so if the dates are correct, then it seems likely that William Dredge did indeed complete the bridge using his father's patent design. William died in 1886.

The bridge is a classic James Dredge design, with the exception of the cast-iron A-frame towers. It spans either 120 feet or 42m across the river (depending which source you credit), supporting the deck from chained eyebar rods. 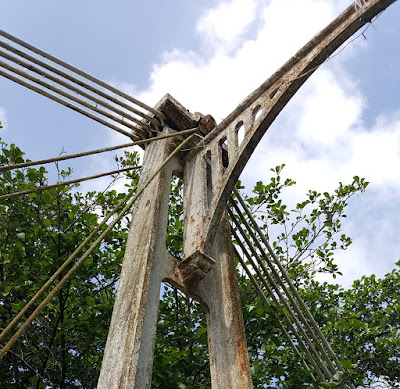 As in all Dredge bridges, the main "cables" diminish in size from support to the centre of the bridge, this being achieved by the expedient of diverting component bars downwards to support the bridge deck at each link in the chain. 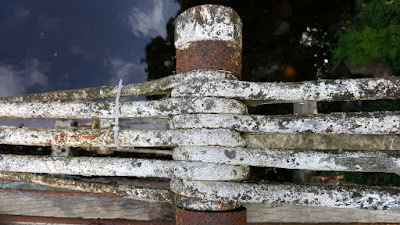 There are five bars in each chain at the towers, reducing to two at midspan. At Doldowlod, two smaller bars are diverted downwards at each connection point. 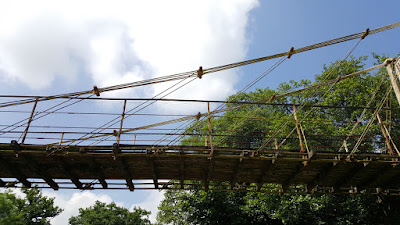 The effect, in theory, is to closely match the amount of metal used in the main "cable" to the level of stress present at each point, and this works as a cantilever bridge, not a suspension bridge (where instead the force in the main "cable" is relatively equal all along its length). This should give an efficient use of material, but it is not a very robust design. 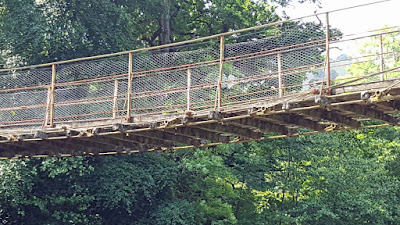 The diagonal hanger introduce a longitudinal force into the deck; this is balanced by forces in pairs of flat steel bars which run along each edge of the deck. Deck joists are held in place between these flat bars, and these carry timber plank flooring. 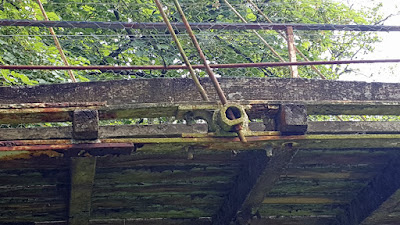 The bridge's appearance is visibly distorted, and it is certainly quite "lively" even under just one person walking across. However, it is otherwise in fair condition considering its age and likely fairly limited maintenance. 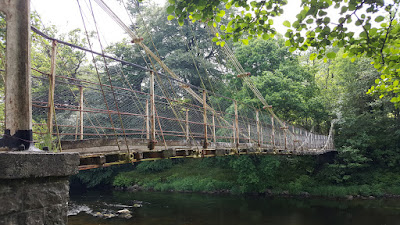 Some sources indicate that there are no more than 7 surviving Dredge bridges in the UK, although that figure does not include the bridge at Doldowlod. I've previously visited and reported on the surviving spans in Bath and Inverness. 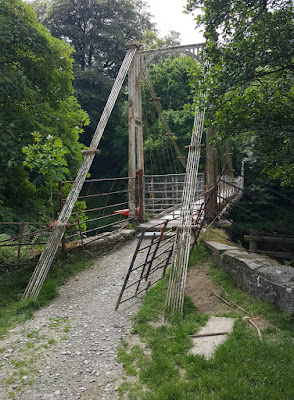 Doldowlod Bridge appears to hold no protected heritage status, which while not unusual for an obscure engineering work, is very difficult to justify given the age and rarity of the structural form. 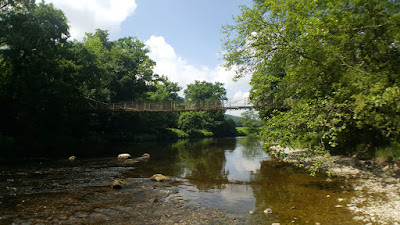 Alan Crow's book indicates that the bridge was repaired in 1962 after being struck by a floating tree, and that in 1989 it was dismantled, refurbished and reassembled by R.J. Hope and Son of Newbridge-on-Wye. He also indicates that there were previously two other suspension bridges on the Doldowlod Estate, of which only foundations now remain.

Further information:
Posted by The Happy Pontist at 11:22 PM