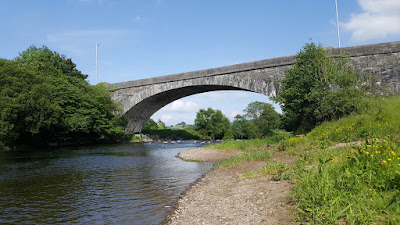 Completed in 1848, the mighty Llandeilo Bridge is one of the largest masonry arch spans in the United Kingdom. By my count it takes third place behind Grosvenor Bridge (61m / 200 ft, 1832) and Ballochmyle Viaduct (55m / 181 ft, 1848), making it the longest masonry span in Wales. (I'm happy to be told otherwise if there are any bridge spods out there somewhere.)

However tall and proud it may stand today, it had a difficult beginning.

The first bridge on this site was a seven-span arch bridge, which partially collapsed in 1795. The failed centre spans were replaced with a timber structure.

According to some accounts, the bridge was replaced in the early 1800s by a narrow three-arched bridge, which proved too narrow for traffic, although not all histories seem to agree (for the most thorough story of the bridge's past, see Llandeilo Past and Present).

County bridge surveyor William Williams was appointed to design a replacement in 1843, estimating the cost of his design to be £10,000. Builder Morgan Morgan was appointed on a contract price of £5,870.

The cash ran out while Morgan was still constructing the bridge foundations, and work was further set back when a flood destroyed part of the works. Edward Haycock took over the scheme, completing the bridge in 1848 with a total expense of £22,000. 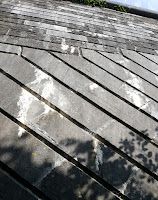 Despite these difficulties, it was a huge engineering achievement. The causeway to the south is a substantial structure in its own right, giving a total length of 111m for both causeway and arch. The town of Llandeilo sits some height above the River Towy and its flood plain, and a lengthy ramp was required to allow traffic to enter the town at a suitable level.

The causeway is pierced by a smaller cattle creep, span which like the main span has an elliptical profile. On the main arch, this choice was driven by the span dimensions and height of the roadway. The cattle creep arch is described elsewhere as a flood arch, but I doubt it adds greatly to the bridge's flood capacity.

The main arch is described as having long, thin voussoirs, but as can be seen close up, they are in fact made up of short(ish) stones with thin ashlar joints.

Looking at the bridge today, it's impossible not to be impressed by the sheer ambition of this small town and those involved in building the bridge. It's difficult to know whether they could have fully appreciated the nature of the task they were taking on. It's interesting to think what would have happened if the entire project had been abandoned after Morgan's failure.

Over Bridge in Gloucester possibly just pips it at 150ft span?

To my tastes this is an extremely beautiful bridge. The fact that it has passed the test of time makes it a complete winner.