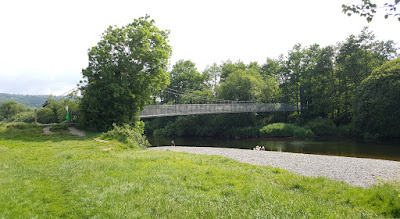 This is the first of two bridges spanning the River Towy that I visited in Llandeilo, a small village in Carmarthenshire.

I've found very little hard information on this bridge. The Bridgemeister website lists it as built in 1911. The same date appears elsewhere, along with an indication that the bridge was built to commemorate the coronation of King George V.

It was originally named the King's Bridge, although nicknamed the Swing Bridge in more recent times (as is the case with many suspension footbridges).

The Buildings of Wales: Carmarthenshire and Ceredigion agrees that the bridge was built for the coronation in 1911, gives the span as 144 ft (44 m), and states the bridge was built by David Rowell and Co. That makes it the third and final Rowell bridge I visited on this trip, the others being Llanstephan (1922) and Elan Village (1904).

This is the least well-preserved of the trio (which is saying something given the condition of the bridge at Elan Village).

It's not entirely clear how much of the original structure remains. The cables look like they may be original, but the hangers and parapets definitely are not. I didn't get a close look at the bridge deck.

The original steel lattice towers, of a design typical of Rowell's bridges (compare the Howley bridge), have been almost entirely encased in concrete, with just part of the upper cross-bracing left exposed, along with the tower finials (another classic Rowell visual signature).

The concrete has preserved the bridge for a time, but at a cost: future replacement of the cables is now made very difficult, and eventually the day will come when the only option is to replace the entire structure. 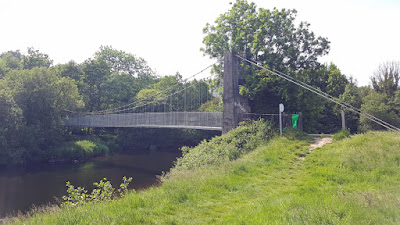 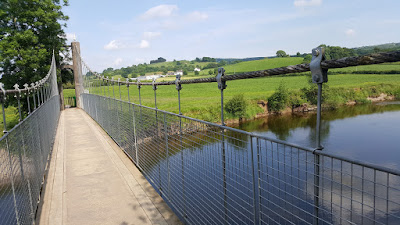 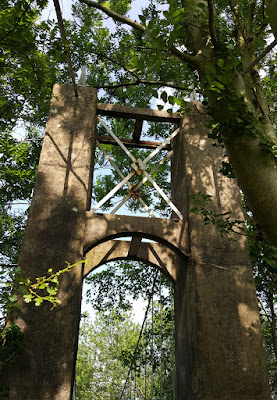 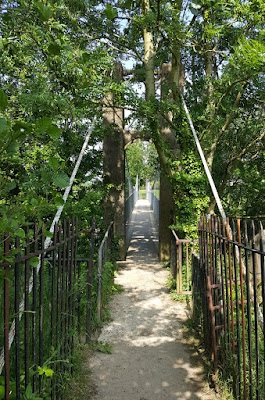 This one appears in the photographs to be very narrow. The encasement of the steel or iron towers seems to have been well done and I find the end result pleasing. The towers seem very sturdy. I don't think it would be an insurmountable task to replace the cables. Some sort of sister system could be contrived where a second cable is placed above or to the side of the original. The towers themselves appear to be in good shape. It seems some sort of twin steel cap could be engineered to carry the load of the replacement cables. Later the original cables could be removed or just left in place if they are not too rusty and decrepit. I would think they could carry their own weight without the weight of the deck for a long time. You are the bridge engineer, it's time to think creatively. In reality this is actually not a huge project; although like everything else, the fix would require time and money. Is the bridge still needed or have alternatives been built?