Collapse of the Polcevera Viaduct 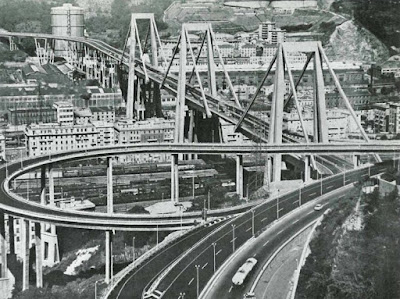 I'm sure most of my readers will have seen yesterday's tragic news that the Polcevera Viaduct in Genoa, Italy, collapsed, with at least 39 fatalities reported. At the time of writing, rescue and recovery efforts are ongoing. A state of emergency has been declared in the local region.

The 1.1km long viaduct carried a major toll road through Genoa, and was a key connection in the route from central and southern Italy to the south coast of France. It was completed in 1967 to a design by the famous Italian engineer Riccardo Morandi, one of a series of innovative concrete stayed bridges that he created starting with the Lake Maracaibo bridge in 1962.

These were distinguished by the use of very simple stay arrangements, using prestressed concrete stays rather than the steel cables already in wide use at the time (e.g. Strömsund Bridge in Sweden, 1955, and the Nordbrücke in Düsseldorf, 1957). 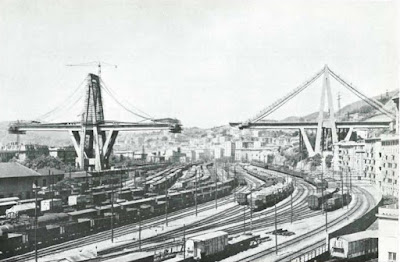 Eduardo Torroja's Tempul Aqueduct, built in 1926, is one of the few predecessors, although Torroja used concrete only as a protective material, it was not prestressed. Concrete-encased stays were also later used on the Prins Willem-Alexanderbrug in the Netherlands (1972) and the Metten Danube Bridge (1981). Morandi's tower arrangement was also used (without the concrete stays) on the Chaco Corrientes Bridge in Argentina (1973).

Morandi's designs, although highly innovative, were a dead end. They required extensive temporary works to support the bridge deck until the stays were completed.

At Polcevera, temporary prestressing was used in the cantilevering deck sections, only to be removed once the stays had been installed. For his bridge at Wadi el Kuf, in Libya (1972), an array of temporary stay cables was used to support the longer spans, with all these cables then removed, rather than left in place as the permanent support system, which was the more logical and much more widespread solution. The Libyan bridge, incidentally, was recently closed for safety reasons. 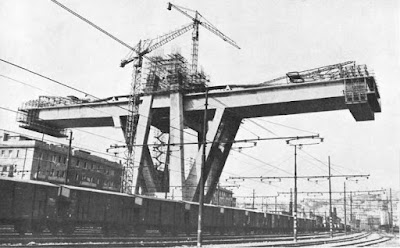 Possibly relevant to the Genoa disaster, these designs also lack structural redundancy. The failure of any one key structural member of the bridge can lead to disproportionate collapse.

The Polcevera Viaduct, and its cousins, have been much admired by engineers and architects.

Michel Virlogeux, in his paper Bridges with Multiple Cable-stayed Spans, notes that the Lake Maracaibo Bridge was "much admired by architects who understand the evident flow of forces and who are sensitive to the impression of strength that emanates from the mass and shapes of the structure". Leonardo Fernandez Troyano described the same structure as "one of the great works in the recent history of bridges" in his book Bridge Engineering - A Global Perspective. In a 2010 paper summarising Morandi's work, Luca Sampo claimed that the Polcevera bridge's "technical features may still today be considered unsurpassed".

There is plenty of speculation on the internet regarding the cause of the collapse, which I won't repeat here.

The bridge's brand-new Wikipedia article is a pretty good source of information. There's a paper from 1995 which discusses previous remedial works to the bridge's main stays. Probably the best read is a contemporary article from 1968 with lots of construction drawings and photographs. All the images I've used here are taken from that article. 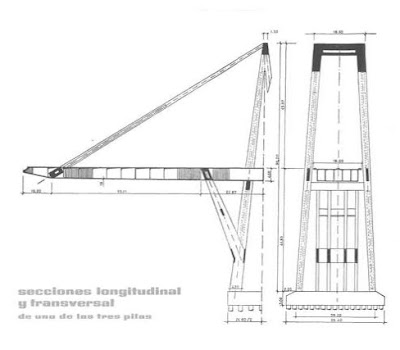 Very useful information provided, particularly in those references - thank you.

The stays of the Morandi balanced trestle consisted of steel cords covered with concrete.

On this structural choice we have found - thanks to Ing. Vincenzo Caruso - a writing by Morandi, which talks about the similar bridge on the lake of Maracaibo:
"If I had foreseen some simple steel tie rods I would have come across, for the passage of the accidental loads (particularly in the severely railway ones) in two serious difficulties: the first that the extension of the tie rods due to the aforesaid passage of the loads would have injured any sheathing of concrete cast to protect them and that the extension itself would have been of such magnitude to disturb even the transit of railway vehicles on the bridge (the lowering of the roadway would have been about 1 meter).
So I thought that if the steel cables had been pretended in such a way that a sheath of concrete previously arranged around them was compressed, the passage of the loads would have operated on it only a compression reduction, without ever reaching zero value for which the fissures were to be excluded conceptually and the deformations would have been reduced by the ratio between the elastic modulus of the steel and that of the concrete. It is also to be considered that the horizontal component of the reaction, at the point of starting of the horizontal girder tie-rod, constitutes an effort of self-compression of the girder which contributes significantly to the good economic resolution of the problem.”

So, his aim was to create stiff "cables" to match his stiff beams. I would be interested to know how the prestressing was done. Were the wires pre-tensioned then released after the concrete was cast and if so what were they tensioned against? Can't imagine how you would post tension that system.