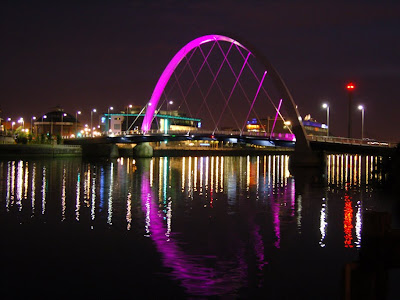 Continuing west from Kingston Bridge, the next span over the River Clyde is the Clyde Arc (previously known as the Finnieston Bridge). This is the last bridge I visited on my short trip along the river.

The £20.3m highway bridge has a 96m main span, suspended by steel hangers from a steel box-section arch passing diagonally across the bridge deck. The arch is diamond-shaped in cross-section. The bridge was designed by Halcrow, and built by Nuttall with Watson Steel. It opened in 2006. 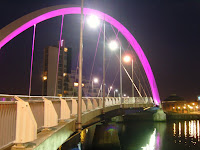 The design would seem to be directly inspired by the Hulme Arch Bridge in Manchester, as were Bolton's Newport Street Bridge and Edinburgh's Gogarburn Bridge (which I'll feature another time if I can dig out any photos). Essentially, it's irrational, because the arrangement leads to very high lateral bending moments in the arch, which govern the entire design. The attraction is the strong visual identity, especially when the arch is viewed from the side, where the hangers appear to cross in a network pattern.

I was a bit surprised by the sheer massive scale of the Clyde Arc - it's by far the largest span of its type (Hulme is second at 52m, while Newport Street spans only 35m). From a distance it looks almost delicate, but up close it's quite overbearing. I found it simply too gross in scale for the context. 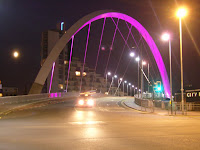 The bridge is probably best known for its unfortunate history since opening. It was closed in January 2008 when a hanger failed (under minimal load) and fell onto the deck, reopening in June 2008 after all the hanger connectors were replaced. There seems little doubt that the cast steel connectors had an inadequate toughness, but since Watson took the hanger supplier Macalloy to court for a £1.8m claim, little further information has been published. As with many modern bridge failures, it's unfortunate that the legal process delays or even prevents the wider engineering community from seeing what lessons are to be learned.

Posted by The Happy Pontist at 8:29 PM

Does it not have something in common with the Brasilia bridge, which has 3 such arches?

The Juscelino Kubitschek Bridge? Yes, it clearly does, a little. I guess I'd wiped that bridge from my brain, I really don't like it. The JK Bridge has a better balanced arrangement of hangers, so the loads on the arch are less asymmetrical, and visually, the "network arch" appearance of the Clyde Arc (with criss-crossing hangers) is not a prominent feature of the Brasilia structure.