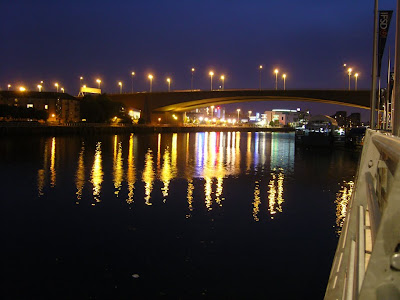 Heading west from the Tradeston Bridge, the next bridge over the Clyde in Glasgow is the Kingston Bridge.

When it opened in 1970, it was reportedly Britain's second longest spanning balanced cantilever hollow box girder prestressed concrete bridge, with a 143m main span. It was beaten only by the Medway Bridge, which had achieved a 152m span in 1963. (Still longer spans came later: the River Orwell Bridge spans 190m, but didn't open until 1982. The 250m span Skye Bridge only opened in 1996.) 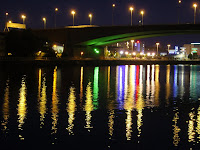 Major defects were discovered in the 1980s and 1990s (including the fact that the main span was sagging by 300mm, and one pier was tilting out of plumb). Since then, the bridge has been the recipient of a massive £30m refurbishment programme. 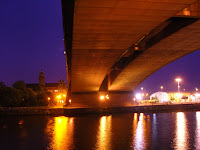 Only the soffit of the central span is illuminated, presumably because of the ability to reflect in the river water. For £300,000, Glasgow City Council got a system of very slowly changing coloured lights, changing steadily through green, blue, yellow, purple etc. The sequencing is supposedly linked to traffic and tide levels, but I couldn't see any particular pattern while I stood and watched.

Lighting only the underside of the bridge does well in distracting from the structure's sheer massiveness (it weighs 52,000 tonnes). I can't help thinking that £300,000 could buy a lot of low-energy lightbulbs for low-income households, however.

Further information:
Updated 7 July 2010: the post previously noted the longer span as of 1970 as being unknown, now changed as I have identified this as the Medway Bridge.
Posted by The Happy Pontist at 9:51 PM