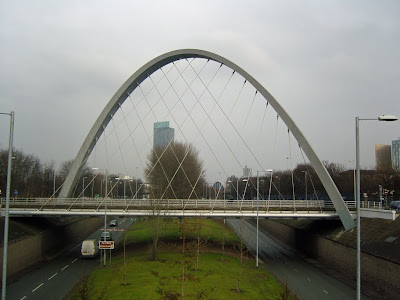 Completed in May 1997, the £2m Hulme Arch Bridge is one of two or three structures which made the early reputation of Wilkinson Eyre as bridge design architects. Designed by their predecessor, Chris Wilkinson Architects, in collaboration with Arup, it is one of the key landmark bridges in Britain built in the last two decades, and a good place to start my visit to the bridges of Manchester. It was built by Henry Boot construction, with the steelwork by Watson Steel. As with all my posts, click on any image for a larger version.

It resulted from a design competition held in 1995, with an open stage followed by submission of full entries from six shortlisted teams. The competition (as so often) sought a regeneration centrepiece, which also served to reconnect Stretford Road across the very busy major city artery, Princess Road. It replaced a footbridge which had been on the site since Stretford Road was split by the construction of Princess Road in the 1960s.

I don't have details of the entrants (images appear in the 28 July 1995 issue of Building Design magazine), but the designs were as follows: 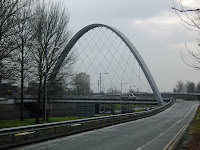 The Arup/Wilkinson design is for a single steel box girder arch, spanning diagonally across both highways, and from which the bridge deck is suspended by cables, each half of the deck hung from half of the arch. The arch is parabolic in profile, rising 25m above the bridge deck. The deck spans 52m, and the foundations consist of piled bridge deck abutments, and ground bearing concrete blocks resisting the thrust from the arch.

The tight curvature of the arch requires substantial internal stiffening to prevent the steel plates from buckling, and at the arch crown, which is only 0.7m deep, concrete was added internally to provide the necessary stiffness. 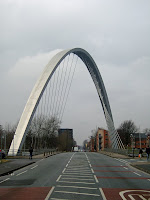 Viewed from Princess Road approaching the Manchester city centre, the deck support cables cross each other, looking not unlike a network arch. It's a classic gateway bridge, a landmark in the literal sense (rather than in the sense promoted by so many developers, of any bridge which is sculptural, "iconic" or like a logotype-writ-large). 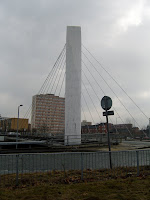 Looking along Stretford Road, there's a very different view, and walking around the structure or driving through generates a wide range of dynamic and generally interesting elevations. This is quite unlike the more traditional single or twin arch solutions which could have been adopted. Indeed, pretty much the only viewpoint which is unsuccessful is one where the arch is seen head-on, and surely only quizzical pontists with a camera in hand will seek that angle out. 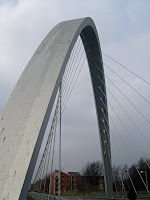 The arch is trapezoidal in cross-section, and this section tapers in both width and depth between springing and crown, adding to the visual interest. However, the bridge deck is less of a visual success, with peculiar cylindrical ribs attached which seem to be there for purely visual effect (see photo below, Wilkinson Eyre describe it as acting like a "nose cone").

All this comes at a cost, of course. The inclination of the hangers generates horizontal forces in the deck, with a tendency for it to twist out of plan which is resisted by the bridge bearings.

The arch itself must carry large unbalanced lateral loads, generating significant lateral bending moments which dominate its design. Much of the bridge material is therefore preoccupied with holding the sculptural form in place, rather than merely holding up the traffic. 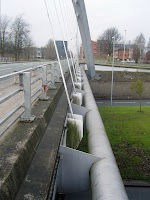 Close up, the bridge has not worn especially well, particularly with substantial moss growth (a feature that will be repeated throughout this series of posts), but this is largely invisible from a distance - the bridge isn't really designed for an intimate experience. It would be interesting to know how well the bridge is being maintained - the designer adopted a vapour corrosion inhibitor inside the arch section, which requires regular reapplication, but which is the sort of thing which often never happens in practice.

I wasn't lucky enough to visit on a bright, sunny day (so apologies for the somewhat grey and lifeless nature of the photos throughout this series), but the bridge must be visually striking and instantly recognisable in any conditions, a consequence of the simple and bold basic concept.