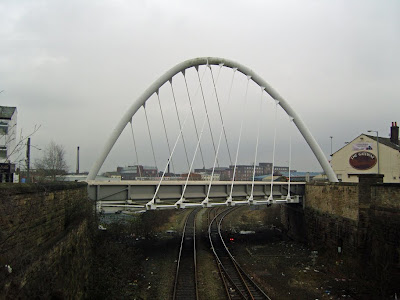 Okay, the end is near and it's time for this series of posts to face their final curtain. Looking back it seems amazing that I managed to visit so many bridges in a single day, especially since this last bridge isn't actually in Manchester at all, although it is still within the boundaries of Greater Manchester.

Newport Street Bridge is in the town of Bolton, a few miles north-west of Manchester. It brings my series of posts full circle, for reasons which will be obvious if you return to the first post, on the Hulme Arch Bridge (there's another similar structure at Gogarburn, in Edinburgh, for anyone wondering how widespread this bridge type is becoming). 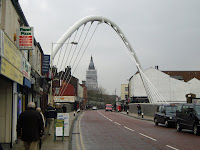 The previous road-over-rail bridge at this site was assessed to have inadequate load capacity, and restricted to 7.5-tonne highway vehicles in May 2001. Several options were considered for its replacement, including a Warren truss design, and a half-through bridge with edge girders, but the favoured option was the steel parabolic arch which has now been built. Apparently, this was not just because it provided a gateway to the town centre and adjacent bus interchange, but also because it was the least expensive choice, which seems surprising.

The bridge cost £4.2m (some £0.9m more than originally budgeted, following a series of cost rises), and partially opened to traffic in December 2005. The main contractor was Galliford Try, with the 265 tonnes of steelwork fabricated by Watson Steel, a Bolton-based firm. The designer was Cass Hayward.

The bridge spans 35m, and the 1m diameter tubular arch is 17m tall. So it's roughly two-thirds the size of its cousin in Hulme. The choice of a tube rather than the trapezoidal section used in the Hulme Arch gives a much less refined, but not unattractive appearance. 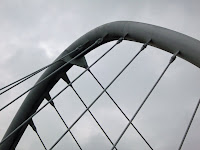 The Newport Street Bridge also suffers in comparison as there are fewer viewpoints from which it can be appreciated. This matters because one of its key visual features is the way the cables are seen to cross each other differently from different perspectives. The Hulme Arch is frequently seen with its cables crossing, but the main view at Newport Street is the opposite. While it is a successful gateway arch, that's true only viewed along the street, as it's essentially invisible to users of the railway below. 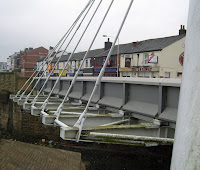 The smaller span and consequent lack of height has also led to the use of much more pronounced outriggers than at Hulme. I guess this is needed to keep the cables sufficiently far from the highway that they aren't vulnerable to accidental impact. The outriggers then have to be braced in plan to resist the horizontal component of the cable forces. It looks a little fussy as a result, but it's not a major defect. One thing I can't quite work out is how the arch thrusts are restrained. Visually, there are concrete plinths which suggest the arches are founded on ground (or connected to the bridge abutments), as was the case at Hulme. However, the online document discussing increases in bridge costs lists £17,000 for "dummy plinth to arch base ... included for aesthetic reasons", so perhaps it is less straightforward than it looks.

Overall, it's not a great bridge, but it appears to do its job as well as it can. As at Hulme, any hope it might actually inspire new development and regeneration seems to be scant, with the Bolton bridge sitting next door to grotty shops and an uninspiring townscape.

That's it for my series of reports from (Greater) Manchester. There were a few interesting bridges I didn't get time to visit, so hopefully I'll get a chance for a return visit some time.

Further information:
Posted by The Happy Pontist at 10:53 PM

I am currently researching the Bridge in Bolton for a HNC Civil Engineering project, where would I find the online document?