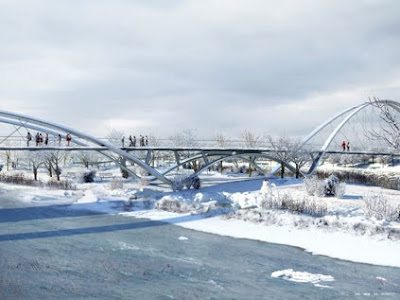 A winner has been announced in Calgary's St Patrick's Island footbridge design competition. The Calgary Municipal Land Corporation have chosen an elegant design by RFR and Halsall Associates Limited for this CAN$25m footbridge, which replaces an ageing suspension bridge link across the Bow River.

The contest was in marked contrast to the direct appointment of Santiago Calatrava for Calgary's other new iconic footbridge. It was open to any interested participants, there was plenty of public involvement, and the process for selection of a winner was relatively transparent. Given the criticism that Calatrava's appointment drew, no doubt CMLC are happy that Halsall, a Canadian firm with an office in Calgary, were part of the winning team (I predicted at the outset of this contest that two of the three shortlisted firms would feature locals, pretty much correctly).

The RFR design was the one I tilted towards out of the three finalists, and it's gratifying to see an honest, engineering-led but architecturally-refined design turn out the winner. The design has seen considerable modification since the initial entries, but it has retained its simplicity and delicacy throughout.

Posted by The Happy Pontist at 8:32 PM

HP the foundation of the bridge on the island looks a little slight to fight ice and water loads. (one of the main concerns for the competition)

Also is there a picture showing how the bridge connects to the island?

Do you think the winner actually represents the stated goals of the competition? In my view, the original contest wording/feeling was looking for a more "exciting" solution than their final choice.

Although attractive the winning bridge(s) are just two arches? Arches that will be easy to build and require very little "new" engineering. It seems like a very safe and frankly, boring solution.

Again sour grapes on my part, but it is not a bridge that people will look at and go "wow". More eh, its fine.

The foundations look slim, indeed. I don't have all RFR's images to hand so it's hard to comment further right now.

As for the contest's goals, I think these were never very clear to begin with - I'm sure they never used the word "exciting", or "innovative", or "iconic", or any of the other things that many competitors seemed to imagine were required!