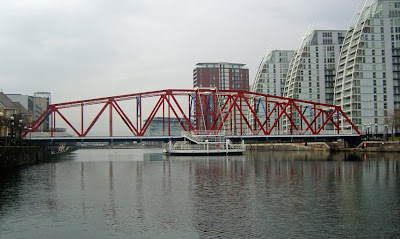 From the Lowry Millennium Bridge, it's only a short walk to Detroit Bridge, which spans Erie Basin just off the Manchester Ship Canal.

In its former life, this was a twin-track railway bridge, one of a number of swing bridges spanning across the Manchester Ship Canal. A single-track rail swing bridge at its original site was first built in 1895, but replaced in 1942 by a twin-track version weighing some 300 tonnes, built by Dorman Long. 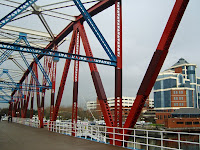 With the decline of dock industry in Salford, the bridge became redundant in 1981, and was refurbished seven years later and floated to its current location. The refurbishment design was by Arup, and included installation of a hardwood timber deck for use by pedestrians, and the loss of all the mechanical equipment. It's no longer a swing bridge, but is permanently fixed in position. 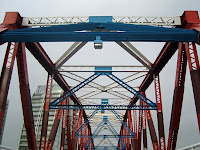 The bridge is 80m long, 9m wide and over 10m tall above deck level. It's in the form of a balanced cantilever modified Warren truss. I would have thought a Pratt truss would be slightly more efficient for this arrangement, as it would eliminate compression in the diagonals, but this may depend on the balance between dead and live load. In its original swing configuration, the bridge acts as twin cantilevers under dead load, while under live load, the bridge behaves as a two-span continuous beam. The balance between each load determines the most efficient truss arrangement.

The timber decking and paintwork lasted 17 years before £0.5m was spent on refurbishment in 2005. The decking has been replaced with non-slip GRP planks, the bridge repainted, and flush-faced panels added to all the truss web members. These are there to prevent people climbing up onto the top of the truss and diving off, which was reported as a regular problem (although they didn't entirely solve it). The panels have also been treated with anti-climb paint. While the practicalities are unavoidable, they definitely detract from the appearance of the bridge. 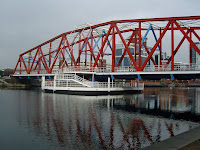 It's marvellous to see an old bridge reused and treated so well. The bridge was well-used when I visited and is likely to become more so when the nearby Media City development is complete.

The most interesting feature of the bridge is the installation of an observation deck below its redundant pivot in the middle of the canal basin. This is accessed on curved staircases, and while it hardly offers a useful viewing platform, it does make the bridge experience more interesting.

A nice blog - just one complaint for you - you refer to Manchester when talking about bridges in Salford - Detroit Bridge and Mariner's Canal Bridge are most definitely in Salford, not Manchester.

Now whilst you may think this nitpicking, Salford and Manchester are distinct citys!

Thanks for the correction, although Salford is of course part of Greater Manchester, and I noted earlier in this series of posts that I'd use "Manchester" as shorthand for that simply to make my life easier!

Interesting, thanks. Why is it called "Detroit?"