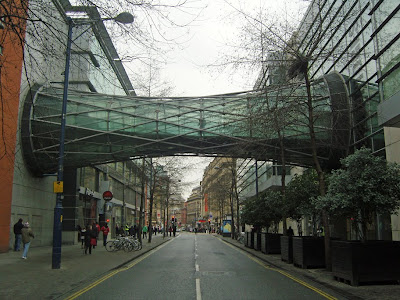 On 15 June 1996, an IRA bomb went off in Manchester, on Corporation Street, between the Arndale shopping centre and a branch of Marks & Spencer. It was the largest peacetime bomb to be exploded in the UK, and even though the neighbourhood had been evacuated beforehand, over 200 people were injured, and about £700m of damage caused.

Extensive redevelopment followed, including the construction of new Arndale and M&S buildings. The old buildings had been linked by a covered footbridge, and a £600,000 new bridge was put back in its place in November 1998. The new structure was designed by Arup, with Hodder and Partners as architect, and built by Severfield Rowen for main contractor Bovis.

The new bridge is, as far as I know, unique in conception and form. Its glazed enclosure takes the form of a hyperboloid of revolution, a geometry best known to structural engineers for its use in thin shell power station cooling towers. I'm not aware of any examples (other than the Corporation Street Bridge), where it has been turned on its side.

Link bridges between buildings are often visually awkward. There are few structures which can bridge between flat building facades without looking at odds with the environment. Not far from Corporation Street, I walked under the three bridges pictured on the right, typical examples of an often shabby genre. I've discussed Edinburgh's Greenside Place Link Bridge here previously, but other recent examples which try to get away from cliche include the Paradise Street bridge in Liverpool, and Cabot Circus bridge in Bristol. 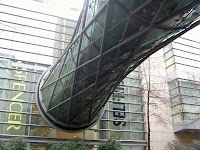 The Corporation Street footbridge is essentially a giant tubular truss, 18m long and 6.2m in diameter, consisting of eighteen 114mm diameter steel tubes alternating with 28mm diameter prestressed tie rods. Each main member is straight (a feature of hyperboloid geometry which makes it easier to describe and set out), and these members are interlinked with a series of circular hoop frames at intervals.

The hoop frame support a grid of steel beams which forms the sloping walkway, which is finished with oak plank flooring. The whole steel assembly weighs 28 tonnes. It's supported from the buildings via circular end frames, which have differing geometry to take account of the fact that the crossing isn't perpendicular to the buildings, nor are the building facades parallel. 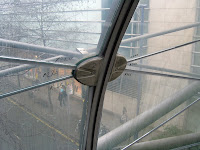 The glazing consists of triangular panels, with ten different sizes and shapes of triangle required in total. These are fixed to the structural frame with cast stainless steel nodes, each of which clamps together six glazing panels. It's nice to see the numbering of the glazing panels still there a decade after it was built.

The glass is now somewhat grimy, and this isn't the only maintenance problem for the bridge. Between the walkway and the glazing, there is a small gap, and dirt, debris and litter has passed through, coming to lie on the glass panels forming the bridge's underside. I've read that the lower panels are designed for higher loads so that maintenance workers can access the space below the walkway, but there's little sign that anyone has done so for some time. That's a shame, because the impression of neglect definitely detracts from the bridge. 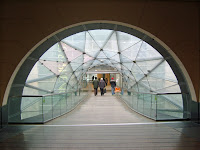 However, it still retains some capacity to enchant. The geometry of the bridge, which as seen on the right creates a star-shaped pattern when viewed end-on, creates a sense of occasion and an experience quite unlike any other shopping centre bridge that I've used. It has a nicely crystalline quality which would only be enhanced if it were to be cleaned up. I hope it will remain unique: it would be cheapened if it were to be repeated elsewhere.

This is getting a little ridiculous!

We don't have this many cool bridges in our whole state!

Great series, but now I'm going past jealous to depression...

Maybe you should design some for them! Only another five posts in this series to go, then I've got two or three very nice bridges from around the world to cover, and then another trip report with three more footbridges from the UK ...

Your really killing me now...