Calgary's Muncipal Land Corporation recently published the three final designs for their St Patrick's Bridge design competition. The three finalists were shortlisted in November, and each given CAN$50,000 to further develop their designs. A round of final public consultation is now underway before the winner is chosen. 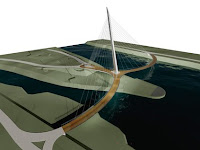 The cable-stayed design from Buckland and Taylor with Kitchell Architecure seems to have changed little, although their submission indicates they have spent their time on the engineering analysis, detailed cost estimating, and closer consideration of the pedestrian experience. This is the only one of the three remaining entries which is unafraid to create a strong landmark.

Arup and Falko Schmitt Architects have also made no major change to their design, which comprises two separate bridges each with a stressed ribbon deck supported by a steel arch. The deck elements use stainless-steel fibre reinforced concrete to reduce their thickness to the minimum possible. As I noted previously, the bridge is essentially a rehash of their competition-winning design at River Douglas, with the same engineer Ozan Yalniz responsible for both.

When I first discussed the entry from RFR and Halsall, I suggested it was "far too skinny", albeit mainly with respect to resistance to ice forces. It's no surprise that this is the design which has been modified the most. The main span arches have been raised in height considerably, and tilted further inwards so they can be braced against each other, rather than separate as originally shown. The initial visuals showed the deck suspended on a small number of near-vertical hangers, which have now been ditched in favour of a set of intercrossing diagonal hangers, a network arch form which is far stiffer than the original concept. Taken together, these changes lead to a bridge which is both stiffer (hence requiring less material to resist deflection) and less prone to buckling than would have been the original concept.

All three bridges remain fine designs with a strong focus on the engineering, and an unwillingness to be seduced by inappropriate flamboyance. I'd be happy to see any of them win, although I have to say that the sheer visual quality of the RFR design reports submitted has swayed me somewhat in its direction.
Posted by The Happy Pontist at 10:12 PM