To round off the Castlefield segment of my Manchester trip, here are a few more bridges spotted in the vicinity, with indications as to further information where I can find it. 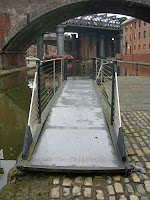 Picking up where I left off, at the Staffordshire Basin footbridges, the photo shows Castlefield's four railway viaducts in the background. From front to back, the brick arch is part of the Manchester South Junction & Altrincham (MSJ&A) Railway Viaduct, built 1848-9 as part of a line out to Salford. Behind that is the 1894 Great Northern Railway Viaduct, with its steel lattice trusses. The 1877 wrought iron Cornbrook Viaduct, built for the Cheshire Lines Committee, is behind that, although you can't really see it in this image. Finally, the 1848-9 cast iron arch belongs to the MSJ&A's Altrincham branch viaduct. 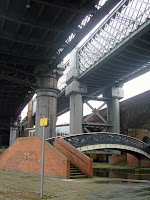 The next photo is from below the viaducts. To the left, the Great Northern, now disused. To the right, Cornbrook Viaduct, which now carries trams. On the far right are the MSJ&A's brick arches, and below them all a pretty cast iron footbridge, of a type typical to the canal network. Lettering on the side declares it to be by Marsh Bros Engineers, Bakewell 1990. Sadly, it is a modern fake - a steel structure with cast iron cladding.

The Merchants' Bridge is on the other side of the viaduct, and looking back through it, you can see some of the same bridges in reverse. Behind Merchants' Bridge is the cast-iron MSJ&A span, abutted by its brick arch approaches, which reportedly use more than 50 million bricks. The Metrolink Cornbrook Viaduct is visible behind and above. 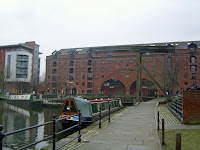 Turning around and facing in the opposite direction, the photo shows the spectacular Middle Warehouse, built around 1830, and now converted into flats, offices, shops and radio studios. This Grade II Listed Building is a bridge in its own right, with twin arches which originally allowed two canal arms to pass within, much like the Staffordshire Warehouse mentioned in the last post. In front of it is a peculiarly large timber bascule bridge (presumably sized so the counterweight remains above head height when operating). I haven't found any information online for this structure. 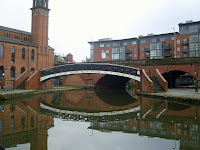 Further round the canal basin is another of the Marsh Bros fakes. I've read that a bridge of this type was considered for the site of the Architect's Footbridge, and rejected, which is a blessing. Castlefield's strength as a heritage site is the conjunction of several different historic developments, and rebuilding entirely arbitrary elements just misses the opportunity to add further to the layering. Behind it is the Bridgewater Viaduct, which carries the main A56 highway into central Manchester. 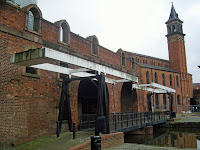 The twin-leaf bascule bridge in this photo is found just across from the Marsh Bros bridge, and allows foot access across the mouth of two tunnels into the sandstone cliff. Canal barges would dock in these, and coal and goods could be hoisted up to street level above. Although mechanisms remain inside, it doesn't look to me that barges would ever enter again, and it's not very clear why opening footbridges were preferred over a fixed link walkway.

Finally, there are many historic bridges within five minutes walk of Castlefield, but I didn't have time to stop and photograph them. I did stop briefly to take a picture of Exhibition Footbridge, which is also nearby. This was erected in 1985 and connects Deansgate Rail Station to the G-Mex tramstop, spanning across Whitworth Street. There are photos of the interior online which show a very grubby interior, a semi-transparent plastic tube which is broken, graffitied and filthy. It's easy to see how it might have once looked a strong, modern statement on paper (or shortly after completion), but the lack of maintenance seemingly endemic to Manchester's bridges has combined with the now somewhat dated visual design to render it quite unattractive.

Posted by The Happy Pontist at 9:58 PM