The City of Calgary is to get not one, but two hugely expensive landmark footbridges. I've addressed Santiago Calatrava's Peace Bridge design previously, but now a sibling is on its way.

Unlike the Peace Bridge, where the city council went straight to the top brand designer, the second CAN$25m bridge will be the subject of an open international design competition organised by the funder, the Calgary Municipal Land Corporation (which is itself owned by the city). Entries are required by 14 September.

The proposed structure must bridge 180m across the Bow River, touching down on St Patrick's Island mid-river. 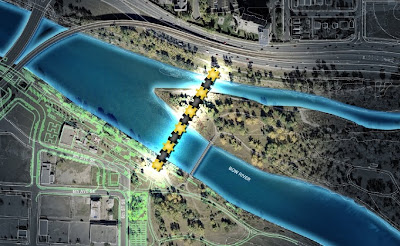 It will be very interesting to see how a proper competition stacks up against the direct appointment of a star designer. Will it offer anything better for the same money? (I'd hope it will offer at least a more rational structure).

Unfortunately, the competition may not attract great designers: the risk is that there will be dozens of entrants, competing for what appears to be minimal reward - there's no prize-money, and plenty of hoops to jump through before landing a design contract. The jury is unidentified, and the judging criteria unclear. None of the lessons of recent failed design competitions have been learned here, that's for sure.
Posted by The Happy Pontist at 11:51 PM

None-the-less, will you be entering?

I was thinking of submitting an entry for this competition and I was wondering if you could me some advice?

The chances of winning an open competition seem very low, do you,

1) Try to win with an "extreme" or "practical" design.
2) Try to be vague or detailed?
3) Develop the concept as a portfolio piece and forget about winning?

4)Forget to mention your an engineer..
5) Change my name to Frank Lloyd Calatrava.

Okay the last two questions were for fun but it would be great if you could write a post giving advice on developing a concept for a competition. What to look for, how to submit a package, etc. I am a newbie when it comes to this sort of thing but I thought I should try at least once in my life.

The Happy Pontist is in discussion with others about whether to enter.

If left solely to me, I would not be entering, partly due to the poor risk/reward arrangements, and partly because it's summer holiday season and the initial project deadline seems calculated to attract those who can churn out 3d renderings the fastest, not those who would rather approach their work in a more considered manner.

I appreciate your blogs about the Calgary bridges. I live in Calgary and it's hard to get an objective opinion.

Currently a lot of people seem "happy" with the new process but from what you're saying, there's a lot of things they can improve in the design competition.

I downloaded the documentation to see what you have to submit. It seems they are asking for more than just a picture concept. They essentially want a 'workable" design.

I don't have a problem with this but from the rules, it seems to rule out anybody who does not have an engineer working with them.

They have asked that a good level of engineering details be part of the plan. I want to enter but it maybe too much for one person.

The most likely scenario is two abutments and one pier/landing on the island.

Hey, HP do you need a former resident of Calgary (and bridge designer) on your team! (I will work for free...)

Replying first to the first Anonymous/ABC post ... that deserves a post of its own, so I'll put one together when I get a moment.

Regarding the last comment from ABC, note that the chief of CMLC (and presumed head of the competition judging panel) is Chris Ollenberger, who is a P.E. with a geotechnical engineering background. So yes, I'd expect a rational engineering design to be important.

However, I don't believe anyone will read the engineering reports in much detail at Step One of the contest, not if there are over 100 entries, which I'd say is quite possible.