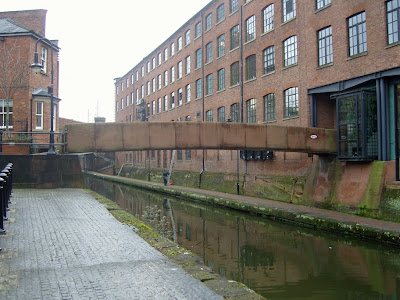 I'm not really sure whether this bridge has a proper name. It's called "Architects Bridge" in one book I have, and simply "Castlefield Footbridge" in another. There's also a plate on the bridge reading "100a", which will be a number given to it by the canal authority, British Waterways.

This small footbridge was built as part of the extensive redevelopment of Manchester's Castlefield canal basin, and is of particular interest despite being one of the smallest and most self-effacing of the many bridges in the area. The next three posts will all be devoted to the bridges of Castlefield.

Buildings at Castlefield can be dated back to Roman times, but much of what can now be seen relates to its situation at the junction of three canals, Bridgewater, Ashton and Rochdale. Castlefield became a hugely important commercial site during much of Manchester's industrial development, an interchange between several different forms of transport, and home to several commercial warehouses. The industry is long gone, and the area is now home to a mixture of new and refurbished offices, flats and "trendy wine bars". 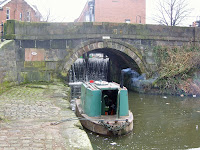 Following the redevelopment of the canalside Eastgate building, a new footbridge was required in 1996 (or possibly 1998 - sources vary) across the Rochdale Canal, a short distance to the north of the two hundred year old Castle Street highway bridge, which is numbered bridge 101 (pictured right). This footbridge connects into a passageway through the offices, and essentially seems to be there to provide quicker access between car parks. It was funded by the Manchester City Development Corporation. 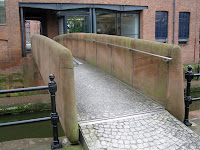 As with many regeneration bridges, it's instructive to wonder whether taxpayer grant aid has produced value-for-money, as other than housing, development at Castlefield apparently stalled some years ago, with several offices and restaurants now closed and empty. When I visited, there were few people around, mainly dog walkers, and for such a spectacular and resonant site, it seems to have become something of a ghost town. 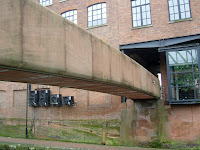 Anyway, the designers of the £140,000 Architect's Footbridge were Ian Simpson Architects and Modus structural engineers (now part of SKM). Their bridge only has to span 15m, and the solution adopted is suitable minimalist. Its skeleton is a stainless steel frame, over which are hung a series of slender blocks of red sandstone, each 1.2m square, sourced from Locharbriggs in Scotland (the quarry at Collyhurst which would have supplied much of the sandstone previously used in the area is closed - you can also see in the photos some of the sandstone outcrop onto which Castlefield has been built). The bridge deck consists of granite setts embedded in a red-coloured concrete slab. 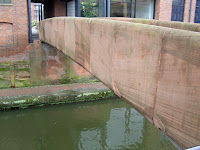 Its rejection of bridge design convention is charming and highly appropriate, and I definitely enjoyed its modest minimalism. However, like the two bridges already visited (and note that this will become something of a theme), it has not been especially well maintained. For such a young bridge, it's disappointing to see the extent to which the sandstone balustrades are cracking, with no attempt at repair (although I'm far from sure how they would be repaired). I guess the sandstone has been cut too thin and that this has led to failure under relatively minimal stress. The sense of neglect is in keeping with Castlefield's ghost town status, of course.

Looking at this footbridge immediately makes me think of deception. A stone bridge is invariably, and traditionally, an arch which this one is not (the camber doesn't count as it's too flat). And to be an arch, it needs a springing which is glaringly absent on the car park side. As a result, I think this one just looks wrong. Lightweight lattice or similar ballustrading would have been far better I think.
As for the sad way in which those sandstone blocks have cracked at the joints, it makes one want to weep. All that expense and effort!

Repairing the sandstone would be difficult. I would imagine painting would be involved after any patching to get a uniform color. Which of course would alter the desired result.

I really just want to compliment HP for the great series of articles posted recently. Stellar work and fun to read.