Having got the two more interesting bridges at Salford Quays out of the way, I made the big mistake of venturing further, along a channel called "Mariners Canal".

This channel is a recent construction, opened in July 1989, and links Erie Basin (where the Detroit Bridge sits) with Ontario Basin to its south. To either side of the channel are low-rise residential developments. Both canal basins are used for watersports, so presumably Mariners Canal provides a useful functional link as well as increasing the amount of higher-valued waterside property. 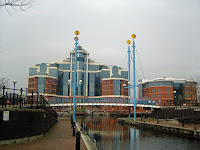 The Canal is crossed by four bridges, three for pedestrians and one carrying the highway. Starting from the north end, the first bridge is a ghastly faux cable-stayed bridge, with masts grossly out of proportion to the bridge and its span. Indeed, the mast and stays are essentially useless, considering that the bridge spans no more than 15m, and probably less than that. 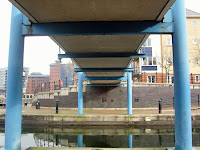 Clearly, they wanted a landmark at the end of the channel, but surely it would have been better to erect a more straightforward structure, and just add a tall sculpture beside it? Or perhaps, a large pike with the head of the designer on top?

As if its general conception were not sufficiently ridiculous, the bridge is further diminished by an ultra-cheap cable anchorage via a joist below the deck, and by bizarre circular plates at the head of each mast. 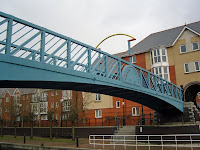 Heading south, and still in something of a state of shock, I came to the Grain Wharf footbridge. My stomach still felt slightly nauseous, but this bridge began to calm me down. The bridge is "dressed" with non-functional steel plates to look like an arch, although in fact it is a Howe truss design. 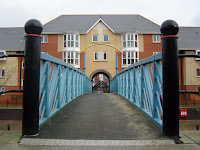 I can almost forgive the fake arches because of the effort put in to make the parapets interesting, with parapet infill bars parallel to the truss diagonals rather than in the more normal vertical arrangement. Indeed, it's actually quite an attractive idea. 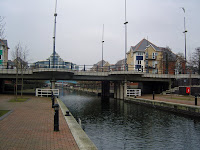 The next bridge along is a highway bridge, and although rather ugly it is not without its redeeming features. Semi-circular belvederes jut out from the sides of the bridge (not because there is literally any "fair view", of course). 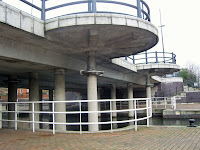 The underside, with its series of fanned ribs, might be thought reminiscent of the great Italian engineer, Pier Luigi Nervi. If you were very, very drunk. 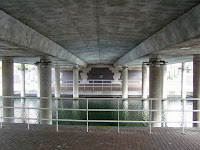 The undercroft to the main bridge deck has a rather startling allure. The circular reinforced concrete support columns should by rights be highly unattractive. However, there's a mysterious, grotto-like quality to this space. I'm sure it is unintentional, but I really enjoyed it (honest, no sarcasm now). 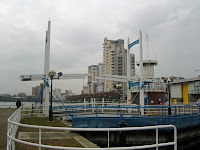 The final of the four bridges along Mariners Canal is simply a repeat of the first, so I skipped past it quickly and took a photo of this nearby bascule bridge (across the entrance to the Ontario Basin) instead. You can see the Lowry Millennium Bridge in the background.