Phew, no news on Calgary's "iconic" footbridge proposals for a while, then it all comes at once. 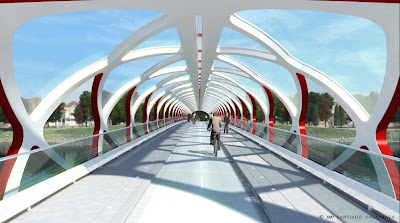 First, there's the news that construction tenders for Calatrava's Peace Bridge (pictured above) have come in over budget. The lowest bid, Graham Construction's CAN$20.5m, is $2.5m above the available $18m budget, while the highest came in at $31m. Negotiations are underway with Calatrava's design team to "value engineer" the project (i.e. cut costs), including ditching an expensive granite flooring and using concrete instead.

I predicted back in June that the prospect of staying within budget was low. The original budget already made this design one of the most expensive footbridges in history (its £17k per square metre of deck budget is above London's Millennium Bridge, and up there with the super-expensive Kurilpa Bridge in Brisbane). But it's inevitable when structural common sense is thrown out the window that there will be difficulties keeping costs down (the ill-fated Neptune's Way footbridge in Glasgow is another classic case).

The construction cost isn't the only source of controversy relating to the Peace Bridge. The direct appointment of Calatrava in the absence of any competition caused something of a furore last year. That one hasn't gone away, with local columnist Rick Bell reporting that an investigation is ongoing into the legality and prudence of the appointment decision, one that gifted Calatrava an incredible $3m fee.

Next up, the Calgary Municipal Land Corporation (CMLC) have announced the shortlisted designers for the final stage of the St Patrick's Island bridge design competition. They are:
Back in September, I predicted six designs who I thought would make a shortlist, none of which did. Oops. I also gave the six designs I'd personally like to see on the shortlist, and two of those (Arup / Schmitt, and RFR) did indeed get through. So perhaps that's a lesson not to be too cynical about these things: common sense and refinement has for once been allowed to triumph over nonsense and extravagance.
CMLC's boss Chris Ollenberger was quoted:

"The three finalists were chosen because they’re respectful, elegant and functional, and offer different attributes for consideration ... The advisory committee agreed that the bridge should be simple and elegant, and that the scale of the structure, in relation to the site and its surroundings, be complimentary and not be overwhelming. Public commentary also supported this direction and we believe that we have three strong, feasible concepts to move forward with."

I previously posted a five-parter on the competition entrants: 1, 2, 3, 4 and 5, which you can check out if you want to see what kind of marvels weren't good enough for the shortlist. Personally, I hope the Arup design now wins: if they're going to go for minimal impact rather than structural gymnastics, that one certainly has it.

The Accelerated Bridge Construction blog speculates that the cost overrun on the Peace Bridge has scared the St Patrick's Island contest organisers away from designs that were daring or innovative. Maybe, but I think the fact that the project promoter, CMLC's Chris Ollenberger, has an engineering background possibly also had something to do with it: a report in the Calgary Herald makes clear that CMLC thought several designs were too ambitious, technically challenging, or just plain expensive.

They've gone for elegance, subtlety and economy, and I guess it's just a shame for the unsuccessful competitors that they didn't state in advance that those would be the criteria (essentially, this unwillingness to say what they were looking for turned the contest into a hugely expensive lottery where the odds of winning could not be predicted).

The promoters also make it clear that public opinion played a large part, which is interesting, because much of the commentary that appeared on the web was from people seduced by architectural flamboyance and largely ignorant of the engineering issues. I think CMLC may have been too conservative though, the final bridge is unlikely to be the kind of landmark which will have potential developers itching to get into the area, which is the ostensible purpose of the whole scheme.
Good news is that each finalist gets a CAN$50,000 stipend to develop their design before a final choice is made, a welcome recognition both for the effort they've put in so far and the work still to come.