I recently visited the Scottish Borders, and took the chance to see three footbridges in the Kelso / Melrose area. The first two of these are historically interesting, but they are really only curtain-raisers for the third one.

The suspension footbridge at Gattonside was first erected in 1826. Design has been attributed both to John Smith (who certainly designed the towers, and who had in 1817 designed a cable-stayed footbridge at Dryburgh, only to see it destroyed in a storm the following year), and also to John Stevenson Brown of the contractors Redpath and Brown. Brown also built a stayed footbridge in 1817, at King's Meadows near Peebles (which lasted much better, succumbing to flood damage in 1954). The Dryburgh bridge will be the subject of my next post.

The 1826 bridge was built to link Gattonside village with the town of Melrose, a function it still serves today.

Spanning 91m across the River Tweed, it had iron chains and a timber deck, and went on to become the oldest structure by Redpath and Brown to survive. They refurbished it in 1928 free of charge.

There are various photos of the original bridge online, especially at the RCAHMS website linked below. These show twin iron chains side-by-side, with a slender post-and-wire parapet. The towers are stabilised by lateral stays, which look a little unnecessary. 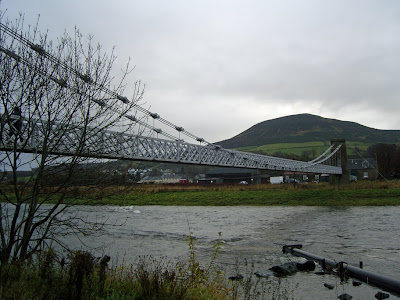 Unfortunately, the bridge was "refurbished" in 1992, by Travers Morgan (now part of Capita Symonds). In reality, everything except the towers was rebuilt, including replacement of the deck and the cable saddles. The original suspension chains were preserved, but moved wider apart so that a new suspension chain could be inserted between them - this new member is a series of bars with intermittent links, and carries all the load, leaving the original chains essentially as cosmetic. The old chains are, in fact, supported directly upon the new chain (as can be seen in the photo below - click on this or any other image for a full-size version), having had the original hangers removed. 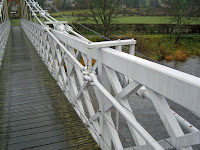 One result of the reconstruction is that the bridge was downgraded from Listed Building Category A to Category B. It's hard to understand why its Listed status didn't offer it better protection. I have a copy of an artist's impression of a refurbishment proposal from 1988, which gives little impression of the very chunky parapets that were actually adopted, although the engineer's reconstruction drawings from the same period are more explicit.

In his 1994 guide to Borders architecture, C A Strang recorded: "Bridge completely reconstructed, 1991, with most unsympathetic new deck; this wouldn't have happened to a Chippendale chair of the same date".

In his paper "Some iron suspension bridges in Scotland", Ted Ruddock was even less sympathetic.

"The bridge's treasures of blacksmith’s empiricism were destroyed in a dreadfully misguided 'refurbishment' of the bridge in 1991-92. Without any increase in the loading, or more than modest and treatable corrosion, the application of modern desk analysis persuaded the local authority’s consulting engineer (or justified his prejudice) that the structure that had served for 170 years should be replaced by a vastly heavier steel structure – a disastrous decision in relation to current conservation principles. All that remains of the original ironwork is the chains, no longer functioning but draped as dead sinews amongst an untidy jumble of new cables and railings".

The Gattonside bridge is one of only three early suspension bridges built in the Scottish borders that still stands (the failures include the bridges at King’s Meadows, Dryburgh, and Galashiels, while the 1820 Union Bridge and 1835 Kalemouth Bridge are the other survivors), so its thoughtless reconstruction is a particular shame. 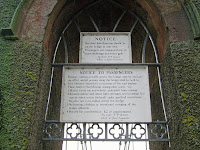 I’m not entirely sure that Ruddock is being fair. The original Gattonside bridge may have stood for nearly 170 years, but it was not without fault. A notice has been retained at the end of the bridge warning of fines for deliberately "swinging" the bridge, and advising that no more than 8 persons should stand on it at once. It would be a surprise if the bridge could have been shown to carry modern pedestrian design loads, leaving the maintaining authority with the difficult job of balancing the risk of overloading (generally low, but high intensity loading is not unforeseeable) against the consequence of failure (likely to be sudden and calamitous). A history of past performance is little guarantee of future safety, as is readily apparent from any study of bridge failures. 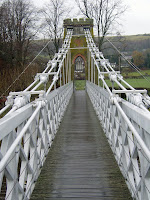 In my own work, I’ve had to advise a client on precisely this issue: a historic suspension footbridge which is self-evidently safe under its normal loading, but which can’t be shown to be safe against crowd loading. In my case, the bridge in question was repaired but not altered.

Other vintage suspension bridges have been strengthened but largely unaltered, as at Union Bridge, where the original suspension chains were supplemented by wire suspension ropes but not rendered redundant, and where a load restriction (one vehicle at a time) was imposed and presumably has been reasonably well obeyed. 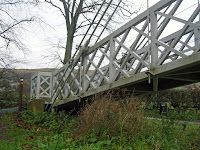 The treatment of the suspension chains at Gattonside is poor, but the design of the deck is worse. Transparent railings have been replaced with clunky stiffening girders which double as parapets. These seem to me to be entirely unnecessary – there are several unstiffened suspension footbridge in use throughout the UK dating from both the 19th and 20th centuries. If stiffening was required, it surely didn’t need to be as obtrusive as this, with its thick welded sections which visually merge into a solid wall from many angles. Again, there are plenty of examples of small suspension bridges with stiffening parapets which use much more slender latticework than this.

Setting aside these issues, it’s worth asking whether the current bridge is successful in its own terms. The conflict between the historic masonry towers and the modern deck is uneasy, but not awful. The bridge is not entirely unattractive, indeed it’s probably quite a challenge to make an ugly suspension bridge. The deck would definitely look better with a slight upwards camber in place of its dour flatness (I think there was such a camber on the original bridge).

Posted by The Happy Pontist at 8:17 PM

The pre-intervention photograph you link to does indeed highlight the full effect of the renovation - and neatly introduced me to the lyrical effect of cambering the deck. The slight arch evident in the 1985 photo is subtle but affecting.

When I make my millions (probably not as a structural engineer!) I plan to find some land on which I can build footbridges of startling, diaphenous construction, designed for a pedestrian load of two...

The biggest load Gattonside took while I was present was about 1.25 people, although even that probably overestimates the contribution of the dog. I'm sure it gets more than that on occasion, but it's hard to believe it ever carries the 2,000-odd people that would be required to match the standard UK pedestrian design load (assuming 91m long x 2m wide = 192 sq.m., then a 5kPa load is equivalent to 8 people per square metre, then there's the 1.5 safety factor on top of that).

Diaphanous - now there's a word I ought to use more often.