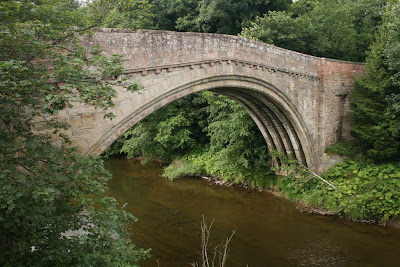 Twizel Bridge sits alongside the A698 where it passes over the River Till, between Cornhill and Norham. The roadway which previously crossed over this narrow (4.6m wide) medaeval arch span has long since been rerouted onto a modern structure.

Along with the Devil's Bridge at Kirkby Lonsdale, Twizel Bridge is one of northern England's great medaeval spans. It's date of construction is not known for sure, although it was certainly there in 1513 when troops crossed it on their way to the battle at nearby Flodden.

It spans 27m, which was reportedly the largest stone arch span in England for three centuries. John Leland described it as "of stone one bow but greate and stronge". 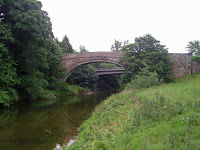 What makes it particularly attractive are its five chamfered ribs, an element which make any masonry arch bridge much more interesting. The dentilated string course is also a nice feature.

Bob Robson's book, linked below, describes a number of repairs carried out to the bridge in the 1960s and 1970s, when it was clearly unsuitable for the traffic on it. Damage to the parapets required repair, a wing wall needed to be propped, and the spandrel walls were reinforced with tie rods (with their anchor plates reportedly hidden behind the masonry facing, although there are further tie rods visible in my photos which perhaps were added later by a less sympathetic engineer).

You just beat ICE NE region to it!

The document can be seen at the ICE downloads Web site.

The Flodden 500 committee are co-ordinating 2013 activities and ICE have been asked to provide interpretation.

See my entry at: