"The World's Footbridges for Berlin"

As part of the Footbridge 2017 conference, the organisers invited attendees to submit design ideas for six potential pedestrian bridge sites in Berlin. The aim was to create a space for creativity, and also to stimulate a different type of debate. It was quite clearly something of an experiment: would anyone be willing to "give up" their best ideas for no reward, and pay a conference fee for the privilege of doing so?

It turned out to be a great success. I don't know how many entries were submitted, but 76 designs have been collected in the book "The World’s Footbridges for Berlin". Copies of the book were given free to all conference attendees, and it's also now available for the public to buy. There's also an online app showing the bridge locations and images of submitted designs.

The six sites selected present a wide variety of challenges. In each case, the site description presented to designers is also included in the book, allowing readers to form their own judgement of each design’s success (or otherwise). Most of the sites are for bridges over water, with one over rail (the least popular with entrants), and one which also spans a city highway.

Several of the sites have a historic resonance. Brommy is the location of a former bridge destroyed by German troops in 1945, and also adjacent to a remnant of the Berlin Wall. Waisen is another location with a previous bridge, while the Spandau Citadel is itself a historic fortress. 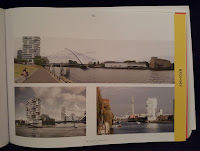 The book contains multitudes. There are designs which are entirely derived from structural engineering concepts, with a minimum of architectural or contextual gloss, and many of these are surprisingly unworkable or foolish. Other designs have little or no structural engineering, a whisper of a concept without serious practical detail. What's notable is that there are relatively few designs submitted by collaborative architect/engineer teams, so generally what we get is the product of participants freed from having to come up with a competition-winning design. It really is about the taking part, not the winner, in this case. 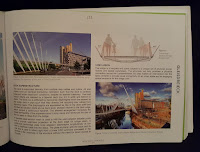 Given the above, the overall quality of the designs is very high. There are number of duds, mostly from the engineer-only teams, but generally the designs are very well presented, and often fascinating in their inspiration or innovation. What's abundantly clear is the pleasure those taking part have found in being given freedom. It reminds me of the creativity I observe in student projects, which are similarly unconstrained by the need to be "the best solution". 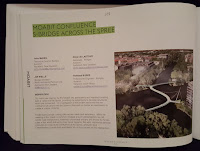 What is also notable is that there are few of the architecturally "crazy" designs which are frequently seen entered in genuine design competitions (there were plenty of these in the Nine Elms to Pimlico contest). I found that a surprise, as you would think that with the freedom involved in "Footbridges for Berlin", there would a greater temptation to go wild.

The entrants are a cross-section of the design community, everything from students to well known bridge designers. Indeed, I was surprised at the number of prominent designers who found time to take part: Brownlie Ernst and Marks, Dietmer Feichtinger, Knight Architects, Schlaich Bergermann, COWI, Moxon Architects, Studio Bednarski, Ney and Partners, Marc Mimram, Dissing + Weitling and many more.

My personal favourite designs tend to have a strong personal story attached, or have shown a greater understanding of the context of each location. I also like those which are something more than a bridge e.g. a love hotel, a roof for riverboat rave parties, or a platform for urban art. 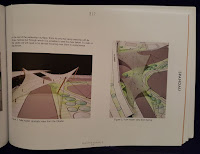 Overall, this is an excellent collection of design ideas, a fascinating insight into how designers of varying background think about their work. It well illustrates the deep subjectivity of the design process, the extent to which context and constraints are a springboard for creativity rather than a straitjacket.
Posted by The Happy Pontist at 8:13 PM