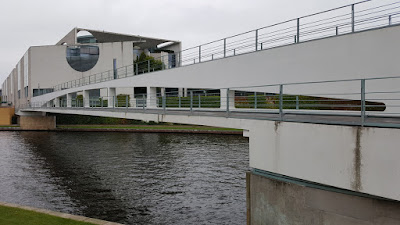 While I was in Berlin recently, I took the chance to visit a number of the city's bridges. A boat cruise along the River Spree provided a prelude to the Footbridge 2017 conference dinner, and I revisited a few of the more interesting bridges as well.

The first of these, the Chancellor's Bridge, or Kanzlersteg / Kanzleramtssteg, is a private pedestrian bridge built for the sole use of the German Chancellor's office and its visitors. The Chancellery sits on the south bank of the Spree here, and is an expansive and to my taste lamentably post-modern establishment, which dwarfs the facilities of the heads of government of many other states (cf. 10 Downing Street or the White House, which are a fraction of the size). The bridge provides exclusive access to the Chancellor's park (and helicopter landing pad) on the north bank. It is only accessible to the public on an open day once a year.

The bridge was completed in 2000, and is a three span structure with spans of 20m, 85m and 17m. The superstructure is of steel box-girder construction, supported on reinforced concrete foundations. It reportedly cost 3.5m euros to build. The designer was engineer GSE with architects Axel Schultes Architekten.

I think this is a decidedly odd bridge.

The bridge links two levels of the Chancellery across the river, and is itself a double-level structure. In cross-section, it is Z-shaped, with the two floors offset either side of the central span girder. This will have made it a tricky beast for the structural engineer to design, with an inbuilt tendency to twist under load, but it's nothing that can't be solved simply by throwing enough steel into the structure.

It seems like a pleasant arrangement, giving both levels the feel of a balcony. At the north end, the lower deck curves to pass below the upper deck. The spine beam element is aligned with a secure wall which protects the Kanzlerpark, so this arrangement allows both decks to pass on the inside of the boundary wall. Access onto the lower deck from adjacent riverside paths is prevented by tall glass screens.

The structural form is very curious. At first, I thought it was an interesting arch, with a feel somewhere between Bauhaus and art deco styles (it also, obviously echoes the simple geometrical shapes used in the Chancellory building itself). It can certainly be seen as a closed-spandrel arch, with the lower deck acting as a tension tie, suspended from the arch with a series of chunky "hangers". Alternatively, it's a bit like a Vierendeel truss. It gives the profound appearance of something not really thought through structurally: it is half wall and half bridge.

The main oddity for me, is the bridge's presence in the public realm. Perhaps German citizens feel otherwise, but I get the impression of something very much intended to display as publicly as possible a separation between citizen and government. Political masters can quite literally look down upon those they govern, and they are made visible but shown to be clearly off limits. The materialisation of a political relationship in this highly explicit manner seems to be something few democracies would consider, except perhaps France. It would surely have been simpler just to omit the north bank park and relocate the helipad elsewhere.

I think I'm not entirely alone in this sense of unease.