Footbridge 2017 had a number of keynote presentations from "big names" in the pedestrian bridge design community: Dietmar Feichtinger, Jan Knippers, Marc Mimram, Jiří Stráský, and Keith Brownlie. For me, the highlight of these was Brownlie's presentation on "Taste (a world of difference)".

Brownlie's design experience spans the globe, and he chose to draw attention to the way in which different styles of bridge design are accepted or promoted in different locations. The aesthetics of bridge design is a topic which has, by now, been pored over extensively, often by engineers seeking to establish a framework of guidance for colleagues. I discussed some of this back in 2009.

However, the issue of taste, the subjective evaluation of aesthetics, has been addressed only in passing. One example that comes to mind is Colin O'Connor's 1991 paper reporting on a series of surveys on bridge aesthetics made with the Australian public. However, the whole issue of what the public think of bridge aesthetics is often ignored by professionals.

Brownlie presented a number of bridge examples from around the world, both built and un-built, loosely tying these together with the thesis that one major determinant of taste is climate, specifically the possibility that 'latitude' correlates with 'attitude'.

Northern-latitude examples include the startling (and, I think, depressing) sobriety which informed the various finalists in the Nine Elms to Pimlico bridge design competition, as well as a number of Nordic designs which are united by their dislike of colour and complexity. At the opposite end of the scale are projects in hotter climes, such as Singapore's bling-laden DNA Helix Bridge (photo courtesy Angelo Pereira), the exuberant Swan River Footbridge (more on this piece of faux-iconic infrastructure some other time, perhaps), or the unsubtle and over-wrought winning design in Miami's I-395 Bridge design contest.

Brownlie's message was simply that the idea of objective aesthetics should be treated with suspicion, and that taste should be acknowledged if not always embraced. He noted that "taste is an ever evolving force", and this is the point I found particularly interesting.

The examples in the paper are all recent designs, largely post-millennial, and so offer a snapshot of current taste. It's easy to find exceptions to the trends set out, but I was left wondering how international tastes in bridge design have emerged, spread, changed, or declined.

One thing that unites Brownlie's examples is that they have been designed and built within a post-modern era. They are not generally representatives of a post-modern philosophy, but they share post-modernism's freedom of treatment of colour, form and style. Playfulness in design has also been greatly facilitated by technological developments, and by economic surplus. This, I think, is one thing that has given rise to the present variety of international taste, and I suspect that economic wealth can also be shown to be prime driver in adoption of some of the more outlandish designs seen in recent decades. Poorer countries generally can't afford to depart so far from pragmatism. 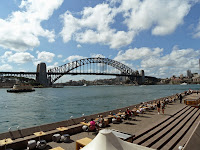 Rationalism is in widespread retreat, and with it the adherence to functionalism that united modernist design. If you look back at many of the nations that Brownlie references, older designs show greater unity. Australia's current taste for the exuberant and irrational (Swan River and Kurilpa Bridge, the latter pictured above left courtesy of Jan Smith) would have been foreign to earlier generations, who had yet to escape the more traditional views inherited from colonial times. The degree of unity seen in the designs of Sydney Harbour Bridge (pictured right), Hell Gate Bridge, and Tyne Bridge is an example: form driven by the practicalities of technology, by the constraints of economy, and by the desire to match form to function.

I think there is also an issue of the desirability of expression of taste, which Brownlie does touch upon, suggesting that in the absence of familiarity with good design, American audiences "literally have no taste". The same is true, I've observed, in Australia, which shares America's frontier heritage: focussed on outcomes, narrow in vision. The result in both nations has often been infrastructure entirely free from any notion of aesthetics, and the current trend towards the overly demonstrative in bridge design in both nations might be seen as a simple over-compensation to their historic cultural deficit.

I think one reason that these developing nations (USA, Australia, along with the Middle-East, much of south-east Asia etc) espouse the irrational, the gigantic, and the frivolous is that they feel left behind by those cultures whose historical continuity has given them a privileged position in the hierarchy of taste. In striving so hard to escape their own inferiority complex, they have ridden a pendulum well beyond what most European cultures would consider tasteful. It is a self-conscious imitation of prestige, almost the very definition of "bling", with inevitable results.

Fashion, in the sense of 'designer' clothing, is increasingly international, with a global audience looking in many cases beyond local tradition towards international brands exhibited in Paris or Milan. The 'brand' influence on taste is less visible in bridge design, with the notable exception of the work of Santiago Calatrava, once (unfairly) derided as the "McDonalds of bridge architecture". Bridge design is inevitably more contextual than fashion, forced by immobility to relate more closely to constraints of geography, climate, history and culture. However, Calatrava makes clear that there is space for brands to set and influence local taste, and indeed I think many of the "exaggeratedly structural" bridge designs seen around the world show the power of the Calatrava brand itself.

In the buildings community, the likes of Gehry and Hadid suggest a wider international acceptance of brand-led design taste, an admiration for freeform extravagance that parallels Calatrava's position closely.

Should designers respond to taste, or look to influence it? Few bridge designers have, or will ever have, the profile of a starchitect. Many espouse a humility and sobriety which is at odds with wider public taste and so are very unlikely to influence it.

Change comes at the point of intersection between design and its recipients, where trends, fashions, philosophies can be influenced or be rejected. Presentation of a compelling vision or a narrative can be powerful. The Footbridge conferences are a great place to cultivate this debate, but the public cannot or do not participate, and clients are also notable by their absence. The difficulty of engagement between the public and those employed to design their environment is nothing new, of course, but I do wonder whether there's a way of getting better public input and understanding not only of specific project issues, but also of wider aspects of aesthetics, value and performance.
Posted by The Happy Pontist at 8:33 PM