And so, we come to Santiago Calatrava.

Calatrava is something of a phenomenon in modern bridge design, and is often cited, quite wrongly, as being singlehandedly responsible for making bridges architecturally interesting. His designs are often immediately recognisable - his combined training as both an architect and as an engineer has led him to produce structures which combine visual drama with structural rigour, a kind of spacial poetics, usually writ large in tons of carefully balanced steel. 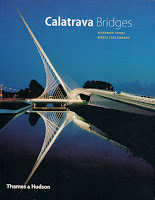 Calatrava Bridges (Tzonis and Donadei, Thames and Hudson, 272 pp, 2005) is ten years out of date now but remains the most up-to-date guide to this superstar's bridges, both built and unbuilt. As with most other books about the Spanish designer, it is in no sense a critical work, but is a celebration of his P.T. Barnumesque showmanship.

Calatrava's work is much-derided by other architects and engineers, if supposedly much loved by the public. Even the latter appears less true now, as he has a growing reputation for budget and programme over-runs as much as anything else. Fellow designers criticise the way that his bridges rarely respond to context, instead taking a signature style (white, generally steel, a cat's cradle of cables, hi-tech detailing) and dropping it into whatever setting is currently to hand. His bridges are bombastic, grandiose, sometimes over-wrought to the point where they become almost hysterical. Modesty and restraint are never Calatrava's watchwords. 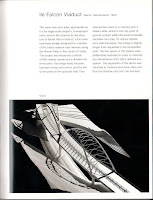 However, as this book makes clear, Calatrava's work is also often geometrically fascinating, spectacular, and informed by a deep love of engineering craftsmanship and technology. That they are instantly recognisable puts other designers to share: he is the supreme bridge design stylist, happy to provide his signature wherever his clients are willing to pay for it. Few designers have been so prolific or so consistent, and if Calatrava has many unbuilt projects to his name, he also has far more completed works than most rivals.

Tzonis and Donadei's book is well illustrated, with plenty of beautiful photographs and quite a few diagrams and architect's sketches. It is not thorough in this regard - this is a good summary of the designer's work but certainly not the definitive encyclopaedia.

Reading through the book today, I am actually most struck by Calatrava's facility for concrete design. His unbuilt Vecchio Bridge would have been a particularly elegant, Maillart-esque concrete arch, while his 9 d'Octubre Bridge in Valencia features some exquisitely shaped curved concrete.

He is also occasionally capable of surprise, with his grey Oberbaum Bridge in Berlin and red-ribbed Ponte della Costituzione in Venice both being fine designs which are all the better for their departures from his usual palette.

A properly critical study of Calatrava's bridges has yet to be written, but until that happens, this book is at least a useful compendium of his work, and one that I am quite happy to recommend.
Posted by The Happy Pontist at 11:49 PM

Taking a look at the Oberbaum bridge and the Ponte della Costituzione, they both remind me of the Stadelhofen railway station in Zürich, Switzerland.

Due to its "engineering gray" colour, the Oberbaum bridge somehow resembles the way engineering structures in Germany and especially in Switzerland seem to appear: as objects in "grayscale", without much colour or liveliness. Having swichted trains at Stadelhofen many times, for me this appears to be the link between the two.

Nevertheless, the Oberbaum bridge and the Ponte della Costituzione are nice examples for more modest structures of Calatrava, something I haven't been aware of till now.