If you're looking for a book about the great Swiss engineer Robert Maillart, then David Billington is your man. He's the author of Robert Maillart's Bridges

(1979), Robert Maillart and the Art of Reinforced Concrete

(1991) and the biography Robert Maillart: Builder, Designer, and Artist

(2008). Maillart also features prominently in his The Tower and the Bridge

(1985) and The Art of Structural Design: A Swiss Legacy

(2003). If there's a number one Robert Maillart fan (and expert), it's quite clearly David Billington. 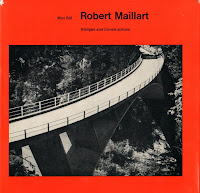 However, none of these is the essential book on the subject. That honour remains with Max Bill's Robert Maillart: Bridges and Constructions

Bill, an artist, architect and journalist, wasn't the first to recognise that Maillart's talent merited recognition beyond the narrow field of structural engineering. In the mid-20th century, a number of people were gradually recognising that the singular reinforced concrete constructions of the Swiss designer had merits beyond the purely technical. However, in choosing to write at length about Maillart's work, Bill played a key role in the designer's enduring fame. 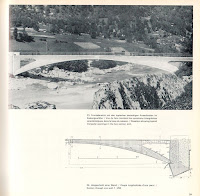 The bulk of this book is taken up by documentation of many of Robert Maillart's key works: black-and-white photographs and generally short explanations in German, French and English. All his finest bridges are here, plus certain key buildings. There is much for the curious reader to consider, and although the text is generally brief, the overall impression is thorough. In contrast, Billington's books never really provide a comprehensive survey, but are significantly better in their analysis of Maillart's significance and his design methodology. 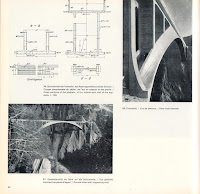 The reason Bill's book is still worth searching out secondhand is that it features a great deal of primary material. There are plenty of diagrams and design drawings, including reinforcement details, but also a number of Maillart's own writings are reprinted - I believe these are not otherwise available in English (the originals are available online at the Schweizeriche Bauzeitung archive). 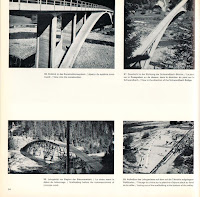 Maillart was undoubtedly one of the true geniuses of 20th century bridge design - his reputation may have been hyped in recent decades, but it is certainly deserved. I suspect that he is the first name most bridge engineers will think of if asked to name a famous bridge designer of the period.

Bill's book remains valuable in returning the reader directly to Maillart's own words and designs, prompting the inevitable thought of how might the modern designer have drawn and built the same things, or things of equivalent quality. Reading Maillart's passionate defence of simplicity ahead of "accuracy" in calculation, it becomes clear that even today, few structural designers have such clear vision or self-confidence.
Posted by The Happy Pontist at 11:20 PM