From Elgin, we travelled east to Buckie. 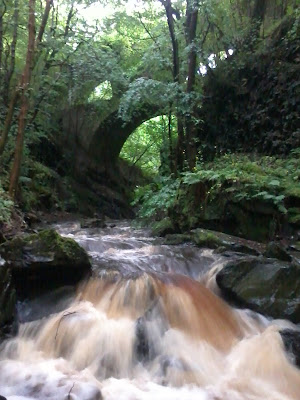 I can't recall when I first visited Craigmin Bridge, but as my previous post makes clear, it was a very hard bridge to photograph. I had hoped that a return visit might get much better images, but as it turned out, poor light and the continued growth of vegetation meant that proved very difficult. So I apologise for the quality of some of these images - they are by far the best of a fairly limited set! 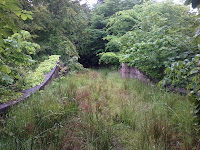 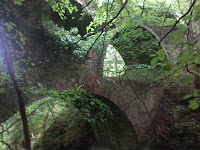 I also suggest going well-prepared with a good map, as there's absolutely no sign of the bridge's presence until you're pretty much right on top of it, hidden deep within a wood. The "paths" down below the bridge are also steep and dangerous, so take care.

The bridge has to be one of Scotland's most-neglected architectural treasures. Unsignposted, unheralded, largely unknown, there's no other structure quite like it anywhere else in the UK. 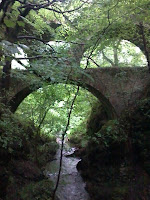 It has a single large masonry arch at a low level. On the north-west corner of the bridge, a doorway opens into the abutment of this arch, which contains a small room. Two further arches sit above the lower arch, springing from its crown. Above the crown, where the two arches come together, there is another room hidden behind walls which are themselves pierced by further arches. At roadway level, there are also arched features in the bridge's parapets.

It's a bizarre arrangement, and a shame that the conditions made it impossible to get a good photograph showing the scale and layout of the bridge properly. The photo at Google maps below is perhaps the best you'll get online, and there are some on the Scottish Highland Bridges site which are pretty good too.

Some reasonable photographs at:
http://www.geograph.org.uk/photo/1364796

I was named after this bridge as my grandad was from buckie not many people can say that :-)

I had the privilege of visiting the Craigmin Bridge on 22nd October 2015.
What a shame that the surrounding woods are being allowed to encroach, not only spoiling the view, but more importantly the bridge itself is being destroyed.
Surely such an unusually designed bridge should be being preserved????
Bruce (a visitor from the South)

Write to development.control@moray.gov.uk to draw their attention to the problem. They can compel the owner to undertake repairs, as it's a Listed Building, or in extreme circumstances they can compulsorily purchase the bridge, although I can't see them wanting to do that with current budgets.

I've just been down there and having lived in this area my entire life and visited most places around here, I am surprised I had never heard of it before. The mind boggles that such a unique structure as this is so unknown, undocumented, uncared for and neglected. An interesting walk to the bridge also, which as you said is completely without signage... Little fairy doors in the trees, carved wooden faces, snakes and god knows what else that I didn't spot. Someone has been having some fun!