I wasn't entirely sure before visiting it whether this footbridge even existed. The main source of information I had was a reference in Gillian Nelson's excellent Highland Bridges book, which didn't have a picture but made the bridge sound worth a visit. 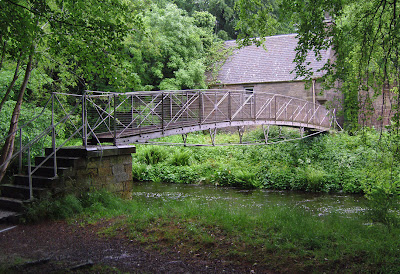 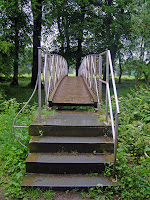 It spans the River Lossie, in Elgin, some way to the north of Craigellachie Bridge. We parked on Oldmills Road, from where a narrow passageway takes you down to the river, and this bridge. I don't think it has a formal name, so I've called it Maryhill House footbridge as that's how it's referenced in Nelson's book.

I love these little 19th century lenticular footbridges. They are the epitome of lightweight design, still a ready source of inspiration to a modern designer. I'd be pretty certain that this one was designed and built by the firm of Charles D. Young and Co., since it so closely matches the diagram given in their 1850 brochure: 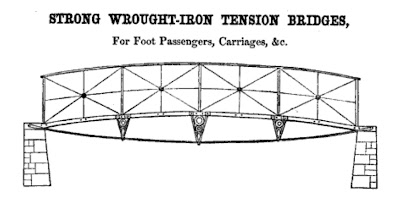 
The principle may be generally described as self-supporting; a strong wrought-iron beam on each side of the pathway, slightly arched, is separated by iron brackets from a tension-bar below, of corresponding strength, and deflected in a curve exactly the reverse of the former. Both of these, namely the beam above and the tension-bar below, join at each extreme, and are securely 'keyed' together; the effect of the principle being that the greater the pressure on the bridge, the firmer it becomes; the intervening brackets so acting as to set off the strain of the one against that of the other.

One great advantage of the Tension over the Suspension Bridge, is its requiring comparatively little mason-work or other outlay for abutments, as it may rest merely on the bank, or a facing composed of either stone or timber.

The brochure mentions an example at Hassendean Burn (near Hawick), built in connection with the now-gone Edinburgh and Hawick Railway. It suggests a price for their Tension Bridge of 20 to 25 shillings per linear foot of span, if for pedestrians and horses, or £3 to £6 for carriages and carts. 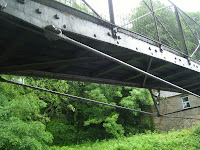 Clearly, their structural understanding wasn't quite right, as the bridge may become "firmer" under higher load, but it would also be more highly-stressed and hence liable to failure. From a modern perspective, it can be thought of as a lenticular truss, or as an underspanned self-anchored suspension bridge, where the deck sits above the main suspension cable, which is in turn anchored into the deck rather than into the ground. 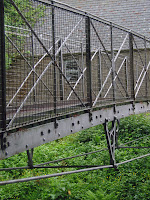 I visited another of Young's lenticular bridges at Roxburgh Viaduct in 2010, which can be fairly confidently dated to 1850, so the Elgin bridge must be of similar vintage. There's also a very fine lenticular footbridge at Denham Court in Buckinghamshire, with the same triangular struts, variously attributed as built circa 1850 or 1870, and quite possibly by Young as well - I can't find a picture online, but there's one in ICE's London and the Thames Valley - Civil Engineering Heritage book.

I can find nothing to dislike about this bridge, it's a pure delight. 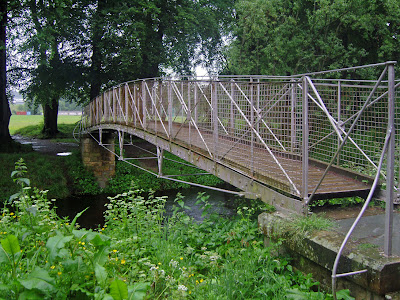