In the last post, I discussed two modern suspension bridges which replaced two of James Dredge's bridges over the River Ness in 1988. One of the two Dredge bridges was salvaged and rebuilt in Whin Park, which is little more than a stone's throw away from its original site. Instead of carrying pedestrians, it now carries a miniature railway track.

Born in 1794, Dredge was a brewer who developed a keen interest in bridge design. In 1836, he patented a new type of bridge on the "Taper Principle". It looked like a variant on the suspension bridge principle, but in fact it is better understood as a cantilever bridge. The main suspension chains reduce in size from the towers to midspan, by the expedient of diverting one chain link at a time downwards towards the deck. At the towers, the chain comprises multiple links, reducing to a single link at midspan. This is intended to ensure that all parts of the bridge are stressed equally, minimising the amount of material required overall. Dredge's first, and possibly best known bridge, Victoria Bridge in Bath, was completed in the same year that the patent was granted.

The following diagram, taken from William Turnbull's 1841 book which attempted to explain the mathematics behind the Dredge design, perhaps makes the concept clearer: 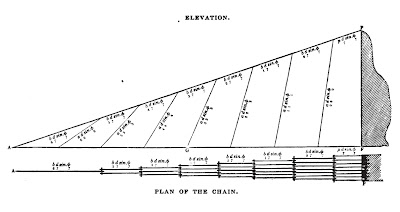 The changing inclination of the hangers is intended to best equalise forces through the various joints in the system. The diminishing chain links can be seen in the plan at the bottom of the diagram. Because it's a cantilever bridge, in theory one of Dredge's bridges could fail at midspan and yet still stand up, which is not the case for a suspension bridge. The inclined hangers of Dredge's design are reminiscent of a cable-stayed bridge, but it's far from clear whether or how Dredge designed for any compression in the deck members which results from the inclination. My own suspicion is that the deck axial forces are carried in tension by the midspan connection.

Dredge went on to design and construct about 35 bridges in total, of which only a handful survive. In Scotland, the only ones left are the splendid Bridge of Oich, and the Whin Park bridge in Inverness. The latter was originally known as the General's Well Bridge, and despite its considerable historic rarity, it no longer has any form of heritage protection (it was a Listed Building at its original location). 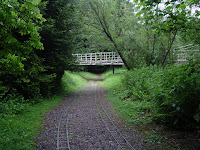 The bridge took us a little work to locate - late on a Saturday evening, the park was largely deserted, and there was no signage either to the miniature railway or to the bridge itself. Eventually, we found the railway, and lurking in overgrown gloom, the bridge. It's largely hidden amongst trees and bushes, very different to when it was first moved to the park, when this was a very open site. 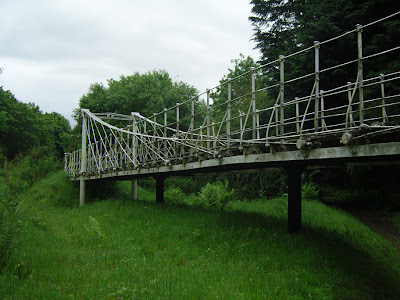 As can be seen in the photograph above, at each joint in the main "cable", two rods are diverted downwards to support the deck. At midspan, the rods from each end cross over each other. 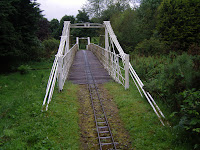 The photo also shows that the bridge is now supported on new beams and columns. It is a flimsy affair, undoubtedly, and it's amazing it lasted as long as it did at its original site.

The view from the end of the bridge shows that the rods also divert to ground anchorages at intervals along the back span. However, the rods also get thicker in diameter towards the end, which seems to be against Dredge's original principles. This was one of his last bridges to be built, so perhaps this approach drew on experience elsewhere. 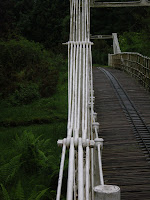 What can also be seen, if you look closely at the photo on the right, is that some of the suspension rods are forked - they have a single hinge at their lower end, then split in two, each rod terminating in a double hinge at the other end. This is a vastly peculiar detail, and one I would have thought was particularly vulnerable to failure given the difficulty in forging a high quality join between the paired rods. 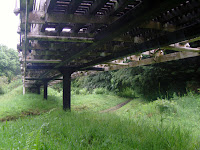 From below, you can see the new support system clearly, and also the very grimy condition of the bridge, which seems to have absolutely no maintenance of any significance since it was moved to its current site. I know that requests have been made for maintenance funds, but without success - the bridge appears to be the property of the miniature railway, who can't possibly fund the maintenance that a complex historic structure like this really deserves.

This was the last bridge we saw on our Scottish tour's first day, and it was an excellent one to end the day on. It's a fantastically eccentric design, an ingenious piece of craftsmanship, and a nice example of one of the more idiosyncratic branches of the bridge-form family tree. Although it has been essentially left to rot, seeing it in gloomy conditions amidst the damp woodland seemed to suit it very well.

It's also a welcome reminder of quite how slender a footbridge can be when the structural form is chosen deliberately so as to minimise material use, although I doubt it would satisfy current vibration standards. 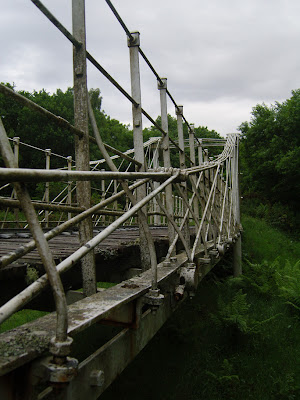 I have walked past it on numerous occassions, oblivious to its historical significance. It really is in a sorry state of affairs, and is less maintained than the giant spider-web of ropes to climb near-by, or Whin Park itself, or even the bridges at Ness Islands, and it is a shame that it is being allowed to fall into disrepair, but you're probably right in that the miniature railway cannot afford to maintian it properly (although, being an integral part of the railway itself, they really ought to). The only thing left to get into an equal state is the seemignly-abandoned kayaking waterway next to it.