This is something of a follow-up to my series of posts last July discussing books about bridges in Britain. I've recently acquired another book which is very relevant to the original subject.

], was published on the occasion of the Public Works, Roads and Transport Congress of 1933. The Congress had sent photographers around Britain to capture images of some 443 existing road bridges (and a few road tunnels), producing an exhibition to accompany the event. The photographers, Messrs Hobbs, Offen & Co, travelled 13,716 miles in the process. The book presents their photographs along with key information about each bridge. As such, it's a wide-ranging survey of bridges both great and small, with some 303 structures illustrated in the book (and more featured without photographs).

The survey drew heavily on Edwin Jervoise's The Ancient Bridges of England books, and so a large proportion of the structures are quaint old masonry arch bridges originally built for horse and cart traffic. There were few major highway bridges built in the 19th century, but the book also features many of the new structures built in the motor car age of the early 20th century. 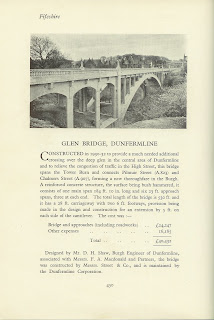 These include a significant number of reinforced concrete bridges, many of them designed by the prolific firm of L G Mouchel & Partners. Most of these are imitative of their timber and masonry forebears, with the more modern structures generally being of the portal-frame type.

A number of steel bridges are included, generally arch structures, as plate girders had yet to achieve their modern ubiquity (which only really grew with the wider application of welding).

An indication of governmental pride in British engineering is given by the introductory chapters, which include a foreword from the Minister of Transport, Oliver Stanley; an introduction by John Buchan; and a paper on bridge development by the Roads Department's Chief Engineer, Charles H Bressey.

It's not a book to read right through, as much of the text is highly repetitive, drily enumerating dimensions, costs, designers, and whether bridges are Scheduled Ancient Monuments or not. It's more of a resource for the historian, although the lack of any referencing makes it an uncertain source of data.

There's little sense of wonder, even where it documents the more remarkable bridges like the transporter bridges at Newport, Runcorn and Middlesborough. But taken as a whole, it illustrates a keen sense of understanding of the continuity in the bridge-building tradition. Jervoise's books were published partly out of fear that an expansion of modern highways in response to the popularity of the motor car was leading to the obliteration of a more pastoral heritage. British Bridges make no distinction between old or contemporary structures, and indeed notes that many of the older structures were themselves replacements for still more ancient crossings, in some cases the third or fourth bridge on any given site.

There are a number of remarkable and sometimes downright odd bridges included here which seem to get little attention elsewhere: the A12 Chelmsford Bypass Viaduct (now called the A138 Chelmer Viaduct, and due to be demolished in 2011); the Keadby Bridge, easily the largest span for a Scherzer rolling lift bridge in the UK when built; the charming Goring and Streatley Bridge (described incorrectly by Wikipedia as steel and timber - but actually reinforced concrete); and the frankly bizarre Findhorn Bridge.

On the whole, despite the often dull text, it's a very useful historical survey of Britain's bridges, a fine addition to a Pontist's library.
Posted by The Happy Pontist at 10:24 PM

I think I'd definitely like to pick up a copy of this book. I've been fascinated with bridges since I was a child, and I think this book would be a great way to look at the evolution of the structure through time. I've got a particular interest in the steel bridges. Steel, I think, is a remarkable material, because it's strong and sturdy yet malleable when it needs to be. There's something poetic about that particular quality of steel; one that I think would make us better people if we could apply it to our own lives.