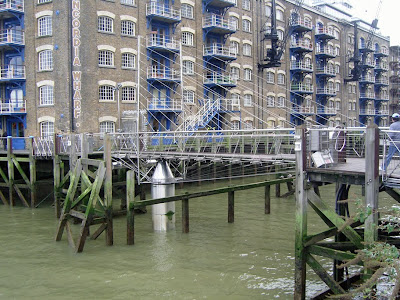 The last two bridges were quite different from each other, but both had in common a basic simplicity of structural form that is characteristic of many contemporary footbridge designs.

The tiny footbridge at St Saviour’s Dock, not far from Tower Bridge, is quite different. Designed by Nicholas Lacey Partners with Whitby and Bird (now part of Ramboll), it spans the entrance to a small dock basin just off the River Thames. It can swing open to allow boats to pass through, although I suspect it doesn’t have to do so very often. 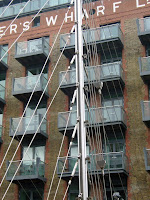 It’s a difficult bridge to photograph, as there is only public access to its riverside face, but hopefully its form can be understood from my pictures. It’s an asymmetric cable-stayed bridge, with a short backspan balancing the longer main span.

One mast sits either side of the deck, with the cables arranged in a harp-type layout on each side. The deck is timber, but pretty much everything else is stainless steel, and as a result it has worn well, not having changed at all since I first visited it many years ago. 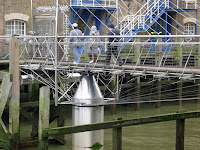 Apart from the pivot, which is enormous and completely out of scale with the rest of the bridge, all the other structural members, including the masts, are as slender as possible. This comes at a significant cost: almost every part of the bridge is extensively braced with stainless steel cables. The deck, for example, has to be pulled down with a network of cables because otherwise it would simply be too light to place the main cables into reliable tension – the cables are therefore presumably stressed against each other. 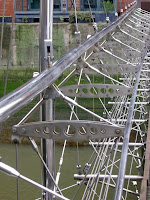 The result resembles a complex piano-wire cat’s cradle assembled by a severe sufferer from OCD. It’s fussy, confusing, and way over-the-top for such a small bridge. There is a certain attraction to its geometric intricacy, but for me this doesn’t outweigh the problems. Even the short side-span at its west end seems over-detailed (not to mention quite different in style to the main deck). 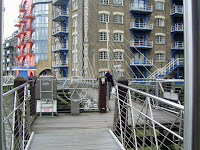 By far the worst feature is the presence of massive security gates at the western end, which hugely detract from the structure and give it the appearance of an ultra-modern security facility.

Whitbybird produced many better bridges after this, and it must rank as a very interesting but ultimately unsuccessful experiment.

There are a number of other interesting bridges in London's Docklands, so hopefully I'll get a chance for another visit to cover some more another time.

Posted by The Happy Pontist at 9:55 PM

Absolute favourite bridge in London. It's ridiculous, but if a bridge is just to convey traffic (human or otherwise) over an obstacle then they could have used off the shelf truss sections or cast concrete, but they didn't.
It's alnkst like they came across a bankruptcy sale at a yacht riggers and tried to use every piece of rigging element they have.
I love the madness and the asymmetry.