There has been a proposal for several years now to build a new bridge across the Rhine in the Upper Middle Rhine Valley, between Mainz and Koblenz at the town of St Goarshausen. It has been deeply controversial, as this part of the valley was declared a World Heritage Site by UNESCO in 2002.

Near the bridge crossing is the Lorelei rock (pictured right, image courtesy of waterproof on Flickr), which is sometimes reputed to be the site where the treasure of the Nibelungen lies hidden. There are no bridges within an 80km length of the river, with crossing presently only possible by ferry.

An international bridge design competition has recently been organised, to find a bridge which is suitable for this historic location, with an estimated capital budget of 40m euros available. The contest featured some of the greatest bridge designers of recent decades: Christian Menn, Leonhardt Andrae und Partner, Wilkinson Eyre, Schlaich Bergermann, and others.

The winner has been announced as Arup with Heneghan Peng architects, the latter being perhaps best known in the bridges field for their London Olympic footbridge. Second place has been awarded to Ingenhoven Architekten, and third place to Schlaich Bergermann / Wilkinson Eyre. Prizes of 40,000, 32,000 and 18,000 euros were provided.

The winning design will now be presented to UNESCO in June, to seek their approval for this somewhat radical intervention in the Middle Rhine's picturesque landscape.

There's an interesting report [PDF] by UNESCO and ICOMOS which covers the issues in detail. The UNESCO author wrote:

"The bridge proposal should demonstrate that there is no break of scale and materials of the future construction in comparison to the existing elements of the World Heritage property (castles, villages)."

"It should be absolutely clear and there can be no doubt that any alterations such as the erection of a modern bridge in the core of the World Heritage site would ruin the outstanding universal values which are inseparably connected with the Romantic perception of this landscape."

ICOMOS is a non-governmental body with no authority over the World Heritage Site, so it might be expected that their more extreme view will be discounted in due course.

However, it's hard to see how any of the designs match the "scale" or "materials" of the local architecture, so it will be interesting to see what view UNESCO take in June.

The winning design seems somewhat self-conscious, an attempt to be radical for its own sake. The truss and box girder combination is unlikely to be especially efficient and it makes me wonder whether a box girder on its own would have been less visually intrusive.

The Ingenhoven design takes precisely that approach, and is my favourite of the three prizewinning designs. By contrast, the Schlaich Bergermann design is a gargantuan and unusual suspension bridge, which in the visualisations seems grossly out of scale to the surroundings. I suspect the images don't do it justice, as the cables could have far more potential to disappear into the background visually.

I also like the Knight Architects design - straightforward, slender, a less aggressively modern type of bridge. The Acme entry is admirably self-effacing and has the merit of considering the river-edge landscaping carefully (I gather this was a basic requirement of the competition) - but possibly too much so, as more minimal treatment of the landscape may have been preferred by the jury. 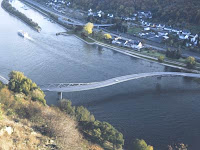 Others
I've only received images of two of the other entries - if anyone else would like to send their entry to happypontist at googlemail dot com, I'll include it here.