After seeing three historic bridges in Scotland, it was time to finish off with something much more modern. So modern, in fact, that it hasn't yet reached its first birthday. 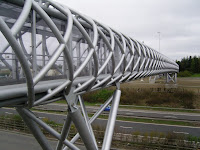 I posted about the £5m Harthill Footbridge when it was installed in October 2008. It spans 70m across the M8 Motorway, connecting the eastbound and westbound service stations at Harthill. It was designed by Buro Happold, adopting the same unusual helical form they had previously applied to Edinburgh's Greenside Place footbridge.

At Greenside Place the complex steel truss had (some) justification, as the bridge is S-shaped on plan and the helical truss is to some extent an efficient way of resisting the resulting torsion. 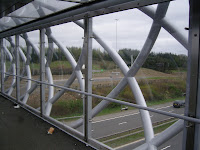 Nonetheless, it's a very expensive solution, as the cost of bending and welding together all the tubular elements must be well in excess of what is involved in a more conventional truss or box-girder solution. It also leads to a substantial amount of understressed metalwork, as the same cross-section appears visually to be applied throughout, although the various load effects in the bridge will vary considerably. 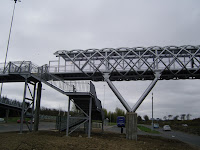 At Harthill Services station, these issues become more prominent, as the bridge is straight in plan and hence torsion is greatly reduced. The bridge's aesthetics also become far more problematic - a bridge looking like a tube can look okay when spanning between the vertical facades of buildings (see also Manchester's Corporation Street footbridge for an example). When sat with its ends in mid-air, it looks awkward. 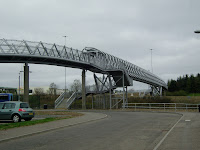 The end termination problem is exacerbated by the very short cantilever end spans (I believe the spans are 10m, 70m, 10m) and the very differently styled approach ramps, which are there to provide disability access without the maintenance liability required by a lift. Personally, I think lift towers at either end would have looked far better. The new staircases are also somewhat cheap-looking compared to the rest of the bridge. 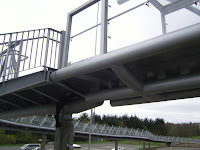 Of course, many of these issues are likely to be the result of choices outside the designer's control. The approach walkways, staircases and span arrangements will all be constrained both by the limitations of the site and of the client's budget. An attempt has been made to use interesting "trussed" parapets on the approach ramps to echo the diagonals of the main span elevation, but it just begs the question of why the main span isn't also a more straightforward Warren truss. Indeed, why is it covered at all, when there is a lengthy uncovered approach at either end?

The bridge is not without its attractions. The helical truss allows the main structure to be divorced from the glazed walkway enclosure, acting as a skeletal cradle, with an interesting visual rhythm (it will also make the outside of the glass a bugger to access for cleaning). It's also undoubtedly nice to see a major UK highways client investing in something aesthetically different and avoiding the identikit bridges which litter British motorways.

But for me, this was an interesting bridge to stop and see, but not one to love.

Posted by The Happy Pontist at 8:11 PM

Since posting the above, I've had a chance to read "Helical design for footbridge" (The Structural Engineer, 87, March 2009, S. Fryer & A. Allegri), which discusses the technical aspects of the design in more detail.

Of interest in the context of my posting are the bridge's reliance on its eight longitudinal tubes (four below the deck, four above), which act as the top and bottom chords of the truss and resist most of the bending. These are visible on some of the photos, but are visually subservient to the encasing helical "shell", which I think is a little awkward - as in a building structure, the element which might be considered structurally secondary is given visual emphasis.

Variation in strength along the span is attained by varying the internal wall thickness of the tubes, from 12.5mm up to 40mm (the helical tubes are 168mm diameter, so 40mm wall thickness is really quite chunky). Again, it's unfortunate that the visual form doesn't reflect this, but that flows inevitably from the initial design decision to adopt a helical tube system.

The bridge wasn't put up untill later months of 2009 so believe what you will of main post. What I'm interested in is the cost? Is £5 million correct?

Given that I visited the bridge in April 2009, and Glasgow's Evening Times (http://www.eveningtimes.co.uk/bridging-the-gap-on-m8-1.963403) wrote about its erection in October 2008, I can't understand this comment at all. The £5m figure comes from the same Evening Times article, it certainly sounds about right comparing the bridge and its ramps to other motorway footbridges elsewhere.