No that's not a typo, fresh from my visit to Aberdeen's Shakkin' Briggie, it was time to visit Edzell's similarly monickered Shakkin' Brig. Like the bridge over the River Dee, the Edzell bridge is a suspension footbridge, although it's not yet a ruin, and not particularly shaky, either.

It was apparently built in 1900, although I think little of the current structure is that old, and I gather that it was rebuilt in the mid-1990s by US servicemen. It crosses the North Esk river just east of the town, and can be found from a footpath behind the village post office.

Quite how much it has been altered is hard to identify: the image above right is from the 1970s (courtesy of RCAHMS), and it doesn't seem much different today. However, old postcards like the one on the left (date unknown) seem to show very different towers to those now present. 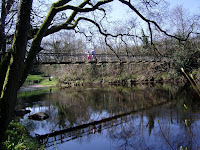 Structurally, it's Edzell's little equivalent of the Brooklyn Bridge, with a hybrid suspension and cable-stayed support system. You can just about make out the cable-stays on the image on the right. You can also see horizontal tie rods, which run from the midspan diagonally to the bank, and ensure that the Brig is not really very Shakky. 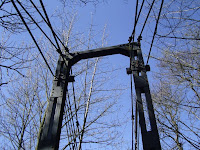 The tower-tops support a mess of cable rods heading off in what seems like several arbitrary directions. The anchorages are similarly higgledy-piggledy in their layout. 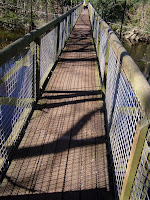 What I like about the Edzell bridge is the detailing. Like many rural bridges, the simple mesh parapets and chicken-wire anti-slip tread (shown right) are a cheap but effective solution which (sadly) slavish adherence to design standards rarely allows to spread more widely. 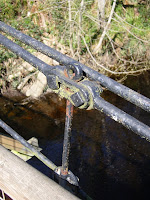 The eyelet connection between the hangers and the main cable chains, shown on the left, is similarly delightful in its simplicity (if clearly unsuitable for any more significant bridge).

The Shakkin' Brig at Edzell isn't a startling design, nor an especially historically significant structure. Its lack of Shakkiness is really rather disappointing.

But it's a fine example of robust vernacular construction (it would seem almost a shame to query who the designer was). It's also a good example of the continuing relevance of the suspension bridge form to relatively tiny spans (for other examples of similar historical vintage see the bridges of Louis Harper or David Rowell).

I'm told by ex-US Navy Seabee Robert Deese that the bridge was rebuilt in the mid-90s, by a four-man team, essentially replacing all the timber (which was rotten) with new pressure and chemically treated wood. So, the current design dates at least from before then. According to Robert:

"The rebuild was requested by the village because the bridge was unsafe. We supplied the labor at no charge and the village paid for the materials. The job was completed in 4 weeks right in the middle of winter. I had to take a swim twice to recover tools that dropped in the river. Man was that water cold!"

I just stumbled upon your page. I jumped off this very bridge in 1995. Quite the adventure.