I recently made a trip up and down the east coast of Scotland, and while looking for bridges was far from the purpose of the journey, I did visit one or two along the way.

These weren't necessarily spectacular structures in any way, indeed several were in varying states of dilapidation ranging from "senior citizen" to "six feet under". But they all had enough of interest to merit including them here.

The first bridge of interest was Aberdeen's Shakkin' Briggie, also called St Devenick's or Morison's Bridge. Built in 1837 on behalf of a local churchman, the bridge was designed by Aberdeen's city architect John Smith, who had worked six years previously with Captain Samuel Brown to design the Wellington Suspension Bridge, also in Aberdeen. The image on the right (courtesy of RCAHMS and dating from the mid-1970s; all B&W images are from the same source; all colour images are mine) shows the bridge a few decades ago and gives a fair idea of its original appearance.

The 55m span suspension footbridge originally provided access across the River Dee for over 700 churchgoers, and got its nickname from its somewhat flexible unstiffened deck.

The bridge was damaged several times by flooding, and affected by changes in the river channel, with its southern spans destroyed in 1955. In 1971, it was declared a Listed Building, but this offered it little protection as in 1984 it had deteriorated so badly that all the decking was removed. The image below right is from the mid-70s while it was in poor condition but still largely intact.

Its twin problems were that nobody knew who actually owned it, and that it was no longer part of a significant footpath route.


Today, it's a sad sight. As is often the case with historic bridges, it has been allowed to fall into ruin over the years to the extent that is probably now beyond repair. 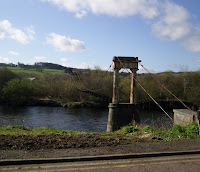 Its Doric-style cast iron columns are heavily rust spotted, while the iron bar main cables and hangers are sufficiently rusty that it's surprising they haven't fallen into the river. Transoms connecting the hangers might suggest an unusual way across for an enterprising trapeze artist, at best. 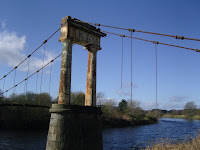 There seems no hope of resuscitation from its current comatose state, but this elderly patient still endures. It sits silently, an accusation against municipal penny-pinching and lack of foresight. At any point, it could have been saved for the cost of medicinal repair far less than would now be required to give it renewed life. 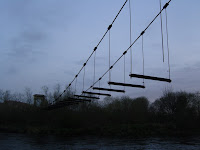 If this were a ruined stately home, it would be given protection and funding by a body like Historic Scotland. Its Listed status might actually offer it some assistance. But the vision needed to create new riverside paths that might justify funding for refurbishment seems to have remained absent for a quarter of a century now. 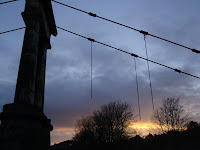 It's hard not to assume that within the next quarter century, much of what now remains will end up at the bottom of the river.

A noble bridge, and a real shame that it has been allowed to rot. Maybe some of the Sustrans Connect2 funding might make its way north of the border? At the very least this should be a lesson for those designing and procuring bridges to ensure ownership and maintenance regimes are properly set in place for the future.

I think the project list for Connect2 is somewhat set in stone and will only get diverted if any of the current projects fail to move forward quickly enough (which is, of course, a very real possibility!)