Ok, this is the penultimate bridge I'll cover in this series of posts on the bridges of Paris. There are many more fabulous bridges in this city, but I'm sticking to those where I have some reasonable photos. 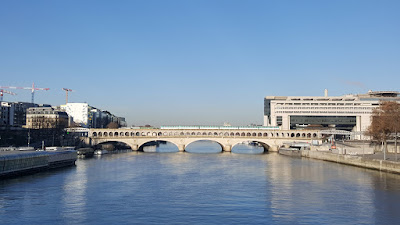 The Pont de Bercy crosses the River Seine to the south of Paris city centre, near the gargantuan Ministry of Finance building and the horrible multi-sports stadium.

As with so many Paris bridges, there is a bit of history.

The first bridge here was a toll bridge which replaced a ferry in 1832. This was a three-span chain suspension bridge designed by Bayard de la Vingtrie and Fortune de Vergès, who have also been credited with the 1828 suspension bridge at the site which is now the Pont d'Arcole (although I've also seen that bridge credited to the better known Marc Seguin). Several images of the bridge are available online.

In 1864, the suspension bridge was replaced by a stone bridge, designed by Edmond Jules Féline-Romany, which is at the heart of the structure seen today. This bridge was widened in 1904, and an arcade built on top to support a Metro line. The bridge in these various stages of development can again be seen online, and my photo on the left shows a view which has not changed since the 1904 widening. The arcade gave the bridge something of the appearance of the Pont du Gard.

Curiously, the bridge has 5 shallow masonry arches, however, sources from the date of its construction refer only to 3 arches. I haven't found any reference to the bridge being lengthened at any stage in its history.

In 1986 a decision was taken to widen the bridge again, this time symmetrically so that multiple lanes of road traffic could pass on both sides of the Metro arcade, not just to one side. A design competition was held, and the winning design essentially replicated the original facade on the outside of a series of new reinforced concrete arches. The stone facade is an exact match for the opposite side of the bridge, but is in new masonry. The widening was completed in 1992.

If you look closely underneath the bridge arches, you can see the concrete section, the widening for the Metro arcade, and the original stone arch barrel. Above pier level, there is a gap between the reinforced concrete and the original masonry, ensuring that the new structure is structurally independent.

The arcade is an unusual feature, and ensures this is an exceptionally well provided bridge for different forms of transport - there are two wide roadways, footways at the edges, the metro line, and a cycle path running beneath the central arcade.

At the end of the bridge, the Metro line is carried on a metal truss structure over adjacent roadways. As can be seen in the final two photos below, this leads to an interesting contrast: the main arcade consists of parallel stone arches supporting a metal bridge deck, whereas the end sections consist of parallel metal trusses supporting brick jack arch deck construction. The relationship of metal and stone is reversed.

This is a fascinating bridge, which I passed by quite quickly but which I expect could repay considerably closer attention. 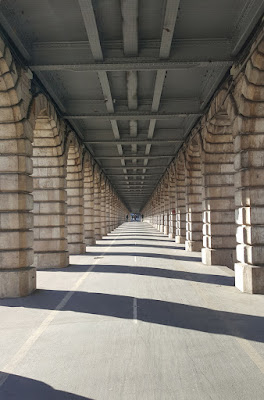 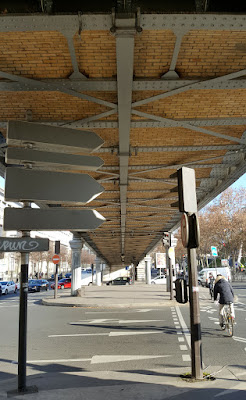 Posted by The Happy Pontist at 5:03 PM

I can confirm that this bridge originally (and always) had five arches as can be seen on these photos from the original construction works [1].

PS: the 3 arches link is pointing to Pont Louis-Philippe which is by île Saint-Louis.