I'm continuing with bridges heading upstream along the Seine. 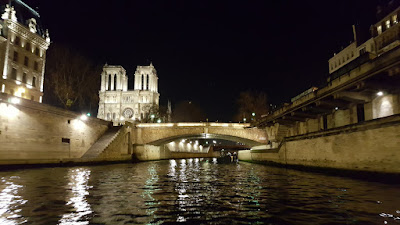 The Petit Pont is at the site of some of the oldest bridges in Paris. Bridges here reportedly date from Roman times, with Emperors Caesar and Julian both writing about bridges spanning across the Seine to the Île de la Cité. A bridge on this site has been destroyed and replaced on numerous occasions.

The present bridge was designed by Alexandre Michal and built by Ernest Gariel from 1852-1853, replacing a previous three-span structure, in order to improve river navigation.

The resulting bridge can at best be described as sturdy, cut from a rough-hewn type of stone which can be seen on other structures in central Paris. 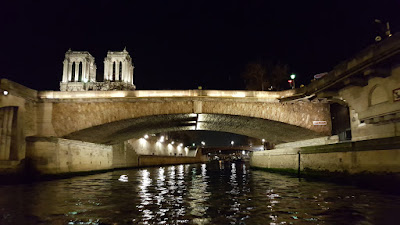 [PS: Readers interested in seeing these Paris bridges, and many others, photographed a few years ago and in daylight, should check out the Bridge of the Week blog - follow the links for April and May 2009.]