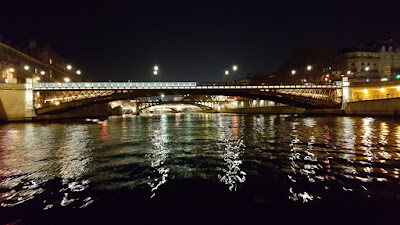 This bridge is on the site of a long-since-demolished suspension bridge, the Passerelle d'Arcole, designed by the great French engineer Marc Seguin. The two-span footbridge was replaced from 1854-1856 by the present bridge, designed by Nicolas Cadiat and Alphonse Oudry, in order to establish a crossing for heavier vehicular traffic.

The bridge is a single arch span in wrought iron, 80m long. It sagged suddenly in 1888, leading to strengthening, apparently by adding "two additional trusses". 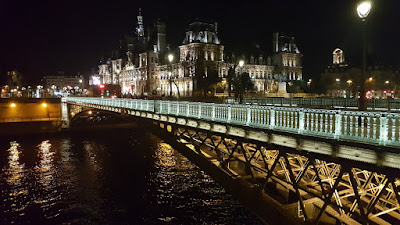 I wonder if this accounts for the peculiar elevations of the bridge. In my photos you can see that there are reasonably stiff arch ribs, connected to the deck by two superimposed truss systems. There is a larger "W" pattern truss, and then additional triangulation is present in the upper half of the panels only. I'm thinking that this additional metalwork was a later addition, which would have served a dual function, of bracing the main diagonals against buckling, and of introducing more frequent points of support to the main deck elements.

However, this may just be a peculiar feature of the original design. The Planete TP website offers this explanation of the strengthening, which I can't make great sense of:


"In 1889, intermediate arches were added under each footpath and the longitudinal girder anchors were removed from the abutments as they had been responsible for structural defects."

As can be seen from the photos, the bridge looks very good lit up at night (although one panel of balustrade lighting was out of action). It gives a very crisp profile to the ornate balustrades. You might think that a triangulated truss bridge would look less attractive than its neighbours, but I don't think this is the case. 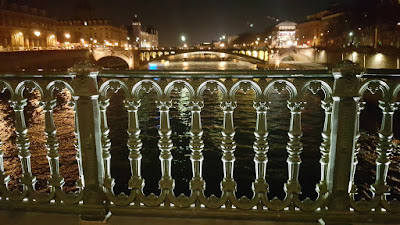 Thank you for sharing those details and historic background to this underlooked bridge of Paris.

Although, some archives (in French) give more details on the remedial works which happened after the 1888 incident.

The additional trusses are actually two archs added to the central group of archs and bracing to the lateral archs have been modified as well. One can compare (and count) this photo from 1870s [1] and that view [2] (thank you Google).

The double W bracing is a feature of the original steel bridge as can be seen on this photo [3] from the great Gustave Le Gray.

Regarding the abutment anchorages, based on a 1888 conference speech by Gustave Eiffel [4] given a few weeks after the anchors ruptured, we learn that the top beams were originally connected to the abutments. The 1922 steel bridge course by Jean Résal given at Ecole des Ponts et Chaussées gives more background on this issue [5].
Hence, the bridge functionned both as an arch and a cantilever. Due to a great cold and after 30 some years, one of the anchors broke and the bridge sagged as it was then "only" an arch.