All the Paris bridges I've featured so far here have been in the vicinity of the two islands in the Seine, the Île Saint-Louis and the Île de la Cité. The remaining bridges that I'll feature all lie further afield. 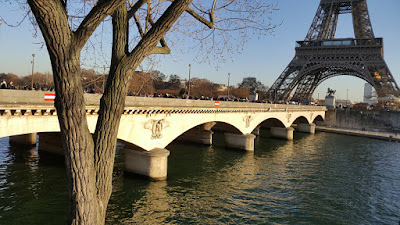 The Pont d'Iéna must be one of the most-crossed bridges in the city, lying directly between the Eiffel Tower and the Trocadéro, although it was originally constructed long before the Tower, or the Palais du Trocadéro.

The five-arch bridge was proposed by Napoleon in 1806, and completed in 1814. Napoleon decided on the bridge's name to commemorate his victory that year over the Prussians at the German town of Iéna. The bridge was built as masonry arches supported on timber piles, and sculptures of Imperial eagles installed above each pier.

However, in the same year that the eagles were installed, Napoleon was defeated by the Prussians and their allies, who took control of Paris and sent Napoleon into exile. One of the winning generals was Gebhard von Blücher, who had previously been on the losing side at the battle of Iéna. Blücher wanted to destroy the Pont d'Iéna but was unsuccessful and eventually dissuaded by his allies. Instead, the eagles were removed, and the bridge renamed as the Pont de l'École Militaire.

Napoleon returned in 1815 before being defeated at the Battle of Waterloo. The eagles were subsequently replaced with the letter "L" (in recognition of the restored King Louis XVIII). After 1830, the bridge retook its original name, and the Imperial eagles were restored in 1852. 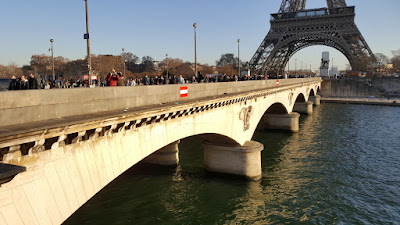 The bridge as originally built was not particularly wide (roughly 14m). In 1900 it was widened to 19m in total by the additional of steel extensions to each side. In 1937, it was widened again, this time to 35m in total, by the construction of reinforced concrete arch structures to either side, supported on concrete piles. Steel girders support a bridge deck spanning between the new and old arches. The arrangement during construction of the two extensions can be seen in a photograph of a model at the Ponts de France site linked below. The concrete structures support a stone facing on which the eagles were re-installed. If you look closely at my photos, you can see that the facing is cracked over every span, presumably because it is not properly supported.

In more recent times, the bridge was seen to be experiencing significant foundation settlement of as much as 0.36m on the worst-affected pier. Schemes were investigated including micro-piling and pressure grout injection. From 2015 to 2016, the foundations were strengthened by drilling micropiles vertically through the masonry piers (from deck level), with 12 piles installed per affected pier. In addition, steel straps were installed below water level to these piers, and these straps prestressed by tie bars through the masonry. The straps are visible in the photos as well. 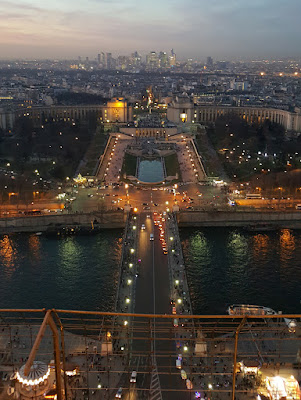